THE LEGACY OF VINCENT PRICE by John Rose

Well, here we are again, and Happy Halloween to all! For our final post on The MonsterGrrls’ Thir13en For Halloween, we will look at one of horror’s true Renaissance men, the great Vincent Price. Though he is known for his roles in horror films such as the Edgar Allan Poe cycle with Roger Corman, Price also appeared on stage, radio and television, was an art collector and arts consultant with a degree in art history, and was also a noted gourmet cook.

Born on May 27, 1911 in St. Louis, Missouri, Price came from a notable family; his father was president of the National Candy Company, and his grandfather was Vincent Clarence Price, who invented the first cream-of-tartar-based baking powder, thus securing the family’s fortune. In 1933 he graduated with a degree in English and a minor in Art History from Yale University. He taught for a year and then entered the Courtald Institute of Art in London, where he intended to gain a master’s degree in fine arts, but found himself drawn to the theatre. First appearing on stage professionally in 1934, he began a full-scale acting career in 1935, performing with Orson Welles’ Mercury Theatre.

Beginning in films as a character actor, he debuted in Service De Luxe (1938) and established himself in the film Laura (1944) with Gene Tierney, directed by Otto Preminger. His first venture into horror was the Boris Karloff film Tower Of London (1939). The following year, Price portrayed the title character in The Invisible Man Returns (1940), but then reunited with Tierney in Leave Her To Heaven (1945) and Dragonwyck (1946) and took a number of villainous roles in film-noir thrillers such as The Web (1947) and The Long Night (1947). From 1947 to 1951, Price was also active in radio, playing the role of Simon Templar in The Saint. In the 1950’s, he moved into more regular horror roles, playing the leading role in the classic House Of Wax (1953), which was the first 3-D film to hit the box-office top ten that year. He also appeared in The Fly (1958) and its sequel Return Of The Fly (1959). That same year, he also appeared in William Castle’s House On Haunted Hill and The Tingler.

In the 1960’s, Price hit his stride with horror, appearing in the now-classic Poe series directed by Roger Corman for American International Pictures. Beginning with the role of Roderick Usher in House Of Usher (1960), Price appeared in The Pit And The Pendulum (1961), Tales Of Terror (1962), The Comedy Of Terrors (1963), The Raven (1963), The Masque Of The Red Death (1964) and The Tomb Of Ligeia (1964). He also starred in The Last Man On Earth (1964), the first adaptation of Richard Matheson’s novel I Am Legend, and portrayed witch hunter Matthew Hopkins in Witchfinder General (a.k.a. The Conqueror Worm, 1968). He also portrayed the comic villain Dr. Goldfoot in the spy spoof Dr. Goldfoot And The Bikini Machine (1965) and its sequel Dr. Goldfoot And The Girl Bombs (1966). On television, Price made guest-star appearances in many shows of the decade, such as his well-known portrayal of the villain Egghead in Batman, F Troop, Get Smart, The Man From U.N.C.L.E., and Voyage To The Bottom Of The Sea, sometimes playing a tongue-in-cheek “horror” role.

In the 1970’s, Price appeared in The Abominable Dr. Phibes (1971) and its sequel Dr. Phibes Rises Again (1972), and also in
Theatre Of Blood (1973), portraying a Shakespearean actor who takes revenge on the critics who ruined his career. Another notable production from this period is An Evening Of Edgar Allan Poe, in which Price performed a one-man showcase of four Poe tales, The Tell-Tale Heart, The Sphinx, The Pit And The Pendulum and The Cask Of Amontillado. Price also recorded a number of dramatic readings of Poe stories and poems, and several records for the Caedmon label that included A Graveyard Of Ghost Tales, A Hornbook For Witches and A Coven Of Witches’ Tales. He was also seen on Canadian television as a narrator on the now-classic children’s show The Hilarious House Of Frightenstein.

Though Price is remembered as a horror star, he was also an art lover and collector. In 1957, Price and his second wife Mary Grant Price donated 90 pieces from their private collection and established the Vincent Price Art Museum at East Los Angeles College in Monterey Park, California. This became the first “teaching art collection” owned by a community college in the United States, and the Prices would ultimately donate some 2000 pieces to this collection. Seeing the importance of fine art being made accessible to the general public, Price also worked as an art consultant for Sears-Roebuck. From 1962 to 1971, Sears offered the “Vincent Price Collection Of Fine Art,” which included prints of works by Picasso, Rembrandt and Dali. Price was also an active gourmet cook, authoring several cookbooks with Mary Price. These included A Treasury Of Great Recipes, Mary And Vincent Price’s Come Into The Kitchen Cook Book, and Cooking Price-Wise With Vincent Price, which was also the title of a cooking show he hosted on Britain’s ITV/Thames Television network.

Price remained active in horror throughout the Eighties, narrating the 1982 Tim Burton short Vincent, and providing the now-famous spoken-word sequence on Michael Jackson’s 1982 hit single “Thriller.” In 1983, he appeared in the British horror spoof Bloodbath At The House Of Death, and worked in House Of The Long Shadows with John Carradine, Peter Cushing and Christopher Lee. From 1981 to 1989, Price regularly hosted the PBS television series Mystery! and in 1985, he was the voice of Vincent Van Ghoul in Hanna-Barbera’s The 13 Ghosts Of Scooby-Doo. In 1986, he was the voice of Professor Ratigan in Disney’s The Great Mouse Detective, one of his favorite roles. His last significant role was as the inventor in Tim Burton’s Edward Scissorhands (1990). During this time he was suffering from emphysema (Price was a lifelong smoker) and Parkinson’s disease, which also contributed to his retirement from Mystery in 1989. On October 25, 1993, Price died of lung cancer at UCLA Medical Center. He was 82. 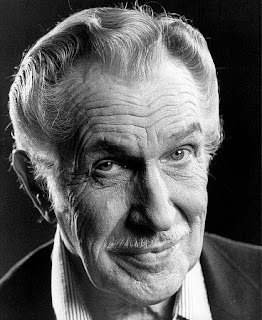 Throughout his life, Vincent Price remained committed to a populist belief system, wanting to share art, fine cooking, and tales of mystery and horror with the general public rather than only a select audience. He was and still is an introduction for many people into the world of classic horror, and his life and career show a person who believed that the good things in life (and horror) were for everyone, regardless of their place in society. It is not for nothing that we at the Monster Shop refer to him with great affection as “Uncle Vinnie.”


And so we close this session of The MonsterGrrls’ Thir13en For Halloween. To paraphrase our Uncle Vinnie's ending Frightenstein monologue, the castle lights are growing dim, and there’s no one left but me… and them.

Happy Halloween From The MonsterGrrls!! 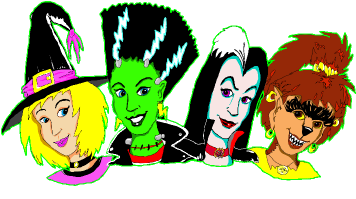