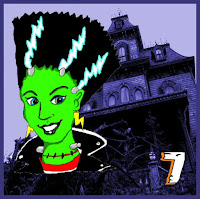 Hello, everybody!  This is Frankie Franken with the next installment of The MonsterGrrls' Thir13en For Halloween, and I hope that so far it's been a happy one for you!

These days, people are doing all kinds of remakes of stuff, whether it's movies or TV shows, and this is  happening in horror films too.  Recently there were remakes of both Nightmare On Elm Street and Friday The 13th, and even though there's a lot of demand for original content, Hollywood still keeps doing remakes.  Today we'll take a look at a recently rediscovered classic horror film, The Old Dark House, which was originally made in 1932 by James Whale, who directed Frankenstein and The Bride Of Frankenstein.  This same film was remade in 1963 by horror auteur William Castle, who directed 13 Ghosts and The House On Haunted Hill (both of which got remakes, too!).

The Old Dark House is the film that more or less invented the "old dark house" genre of horror movies, and has a lineage that includes such diverse films as The Texas Chainsaw Massacre and The Rocky Horror Picture Show, and certainly more than one episode of Scooby Doo, Where Are You!  Three travelers, Philip and Margaret Waverton (Raymond Massey and Gloria Stuart) and their friend Roger Penderel (Melvyn Douglas) are caught in a rainstorm and arrive at a remote, decaying old mansion looking for shelter.  The house belongs to the Femms, a family of recluses that seems more than a little crazy.  The Femm family includes craven, fearful Horace (Ernest Thesiger), his fanatical sister Rebecca (Eva Moore), their mute butler Morgan (Boris Karloff) and their brother Saul (Brember Wills) who spends most of the film locked in the attic.  The Femms are reluctant to entertain the travelers, but bring them out of the storm
anyway.  Soon, Sir William Porterhouse (Charles Laughton) and his mistress Gladys DuCane Perkins (Lillian Bond) arrive at the house, which seems to make the Femms behave even more strangely.  Things come to a head when Morgan, who is unfortunately alcoholic, gets drunk and releases Saul, who turns out to be a psychopath and a pyromaniac.

Upon its release in 1932, TODH was not well reviewed.  Although most New York reviewers praised the film for its wealth of talent (including horror luminaries Karloff, Thesiger and Laughton), the film was panned by Variety and The Hollywood Filmograph, and suffered negative word-of-mouth.  For several years it was considered a lost film, until a print was found in the Universal Studios vaults in 1968 and restored.  Today it is considered a cult film and enjoys a reputation as an interesting landmark in the career of director James Whale.

In 1963, William Castle remade The Old Dark House as a joint effort with Universal Studios and Hammer Films, starring Tom Poston, Mervyn Johns, Robert Morley, Janette Scott and Fenella Fielding.  The remake deviates from the original in many ways: apart from being in color, the remake is the story of Tom Penderel (Poston), an American car salesman traveling in London who delivers a car to an old mansion in Dartmoor, the family home of his eccentric roommate Casper Femm (Peter Bull) who has told Tom that he must return to the mansion each night before midnight.  Upon arriving, the car is damaged in a storm and Tom is invited to stay at the Femm house, where he meets Jasper, Casper's twin brother (also Bull), his two nieces Cecily (Scott) and Morgana (Fielding), gun-obsessed father Roderick (Morley) and Uncle Potiphar (Johns) who is building an ark in anticipation of another Great Flood.  Though initially frightened upon discovering that Casper is dead, Tom is attracted to Cecily, and ends up staying the night.  Tom is drawn into the Femms' weird world and soon discovers himself in the midst of a murder plot against the Femms, where someone is attempting to gain the family estate by killing all the living heirs.

TODH '63 is considered inferior to TODH '32, despite the fact that TODH '32 was kind of an oddball film all its own.  Though the stories are basically variations on the theme of outsider trapped in an old house with strange people, I think TODH '63 has a few merits of its own.  The macabre comedy is played up, bringing a kind of Addams Family feel to the picture (the film's credits even feature drawings by Addams himself!), and the actors for TODH '63 were pretty talented too: Morley was a well-known and established actor in film and theatre, Johns was a distinctive character actor in England who was known for his Bob Cratchit to Alastair Sim's Scrooge, Poston was a noted comic actor in both film and TV, and Fielding was a popular actress who had appeared in several films, most notably to horror fans in the comedy Carry On Screaming.  All in all, TODH '63 is a very different film, and shouldn't be judged for its connection to the original.  The Mad Doctor said this about the Dark Shadows movie, if you'll remember, and I kind of feel the same thing is going on here.  So if you're interested in seeing either (or both) of these films, they're worthy additions to your viewing experience, especially at this time of the year.

Well, that's it for me, and I'll see you soon.  Come back for the next installment of our Thir13en for Halloween!

MAD DOCTOR'S NOTE: Both versions of The Old Dark House are available from Amazon and Netflix.  Check them out.

Posted by Frankie Franken at 5:18 PM