Review Of A CHRISTMAS STORY By John Rose 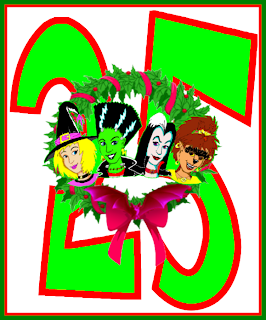 It's the 25th! Today we wish all of our readers a most happy and Merry Christmas, and our final 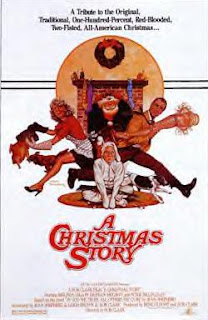 post for The MonsterGrrls' 25 Days Of Christmas is a review of the popular holiday film A Christmas Story, based on the Jean Shepard novel In God We Trust, All Others Pay Cash. Director Bob Clark was inspired by radio personality Shephard's stories of growing up in northwest Indiana, and was allowed to make the film after the success of the first two Porky's films. 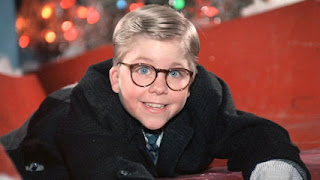 Ralphie Parker (Peter Billingsley), a boy growing up in 1940's Indiana, is obsessed with receiving one thing, and only one thing, for Christmas, "an official Red Ryder carbine-action 200-shot range-model air rifle." A large part of the film is devoted to the various ways and means of alerting his parents (Darren McGavin and Melinda Dillon) to this fact, despite constant 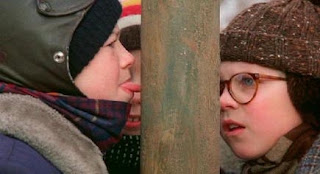 admonitions of "you'll shoot your eye out" from his mother, his teacher (Tedde Moore), who writes this on an essay about the air rifle just below Ralphie's grade of C+, and the Higbee's department store Santa (Jeff Gillen) who is Ralphie's final avenue of hope for his wish. Meanwhile, Ralphie and younger brother Randy (Ian Petrella) and his friends Flick (Scott Schwartz) and Schwartz (R.D. Robb) must deal with the usual trials of childhood, including the classic triple dog dare between Flick and Schwartz over whether or not a person's tongue will stick to a 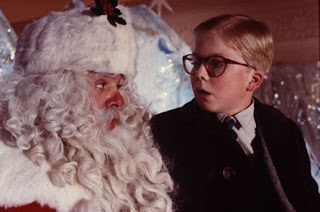 frozen flagpole, and neighborhood bullies Scott Farkas (Zack Ward) and Grover Dill (Yano Anaya) who finally receive a brutal beating at the hands of Ralphie after a particularly rough day on the road to BB glory. There are also the Old Man's daily battles with the house's recalcitrant furnace and the neighbors' bothersome hound dogs, Ralphie's unfortunate use of the dreaded F-dash-dash-dash word and the receiving of the Old Man's Major Award (the infamous Leg Lamp, which the Old Man loves and the Mother loathes). All of these vignettes together add up to a mad Christmas punch of Norman Rockwell and Mad Magazine that is now regarded as nothing less than a perennial of the holiday season. The film has now been immortalized as a holiday perennial, and is often aired in 24-hour marathons on the TBS station, beginning on Christmas Eve.

Much of the film's perfection is derived from its mixture of holiday sentimentality and good-natured satire that manages to stay mature without sliding into gross humor. Billingsley, Dillon and McGavin (who is, and perhaps will always be, The Old Man for all time) shine in their roles, and their supporting cast brings a sense of realism to the holiday madness that occurs throughout the movie. If you watch one Christmas film during the season, it should be this one.

We hope that you all enjoyed The MonsterGrrls' 25 Days Of Christmas as much as we enjoyed bringing it to you, and all of us here in the Monster Shop wish you all a very Merry Christmas and Happy New Year. Stick around, because there's no telling what we'll do next... 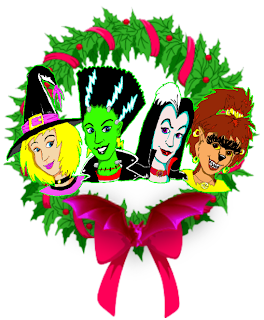 MERRY CHRISTMAS TO ALL
FROM THE MONSTERGRRLS