WRITERS ON THE STORM: MARTIN POWELL AND THE HALLOWEEN LEGION By Punkin Nightshade 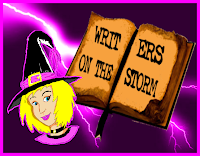 Well, hey there!  This here is Petronella Nightshade, what am Punkin, and today I am doin another of them Writers On The Storm interviews.  Today I am speakin to a feller named Mr. Martin Powell, who has done wrote a book about somethin that I bet ain't nobody else ever thought of: Halloween superheroes.  I am sure excited about this, cause my feller Stuart is collectin all kinds of comic books and such, and all of them got superheroes in them, and I allowed one day as to how there ought to be some superheroes what was like Halloween folk and such, and I swan if it ain't here they come.  Mr. Powell's book is called The Halloween Legion, and he will soon be havin a comic book out what's got them in it, but this one here what's he made is all writin with some pictures.  So we got us one of this here book and done passed it around and it is a crackerjack, I am tellin you, so natural we all decided we had to talk to Mr. Powell.  So the rest of this here is me and Mr. Powell talkin. 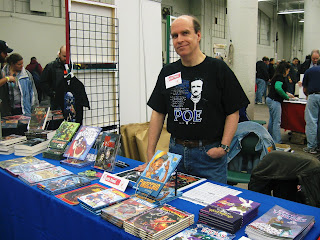 Welcome to the Monster Shop, sir! Can you tell us about yourself and what you do?

I make stuff up and write it down so, hopefully, folks will read it. All kinds of stuff. Prose, comics, children’s books, scientific and educational material, screenplays – I’ve pretty much had my hand in all of it for the past twenty-five years or so.

You done wrote a book called THE HALLOWEEN LEGION. What's this here about, and how'd you get started on it? 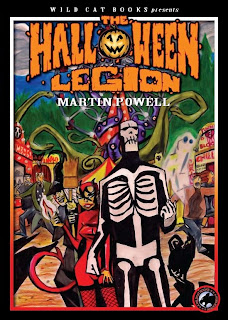 Well, The Halloween Legion are the World's Weirdest Heroes, a group of characters that I originally dreamed up way back in my high school days. One particularly mind-numbing afternoon in class, I started sketching these figures in my notebook: a Skeleton, Witch, Devil, Ghost, and a Black Cat, the iconic archetypes of Halloween. When I first drew them all together, as a group, I immediately began imagining a whole series of adventures for them. They’ve been lurking and evolving in my subconscious until recently, patiently waiting for their chance to be born. I’m actually very glad that I waited this long. I don’t think I would have been quite prepared for them before now. Autumn is my favorite time of year, and Halloween in particular, and I wanted to capture that feeling of magic and mystery, the sort of thrill you get as a kid when you first notice the orange, red, and yellow leaves following you down the street. It’s too brief a season, and I’ve always wanted it to go on forever. The Halloween Legion is my way of keeping the autumn season with me all year long.

And a right smart of a book it is, too!  But I heard you is into old pulp heroes and such. What's some of your favorite ones? 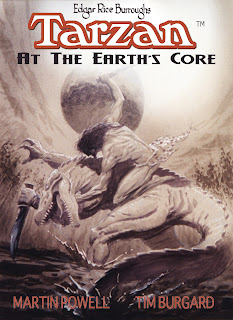 I became acquainted with the pulps when I was about twelve years old, as a friend introduced me to the Doc Savage paperback series. Next time I was at the store I bought one, read it, and was immediately addicted. I still am. I discovered Tarzan and the many other creations of Edgar Rice Burroughs around this same time and I haven’t been the same since. Starting in 2006, I’ve been fortunate enough to regularly write the original pulp hero The Spider, both in comics and prose, and I’m also currently composing Tarzan At The Earth's Core as a graphic novel, as well several other licensed Burroughs properties, which will be published by Sequential Pulp Comics, a new imprint of Dark Horse Comics. So, I’m definitely living the dream.

So you is up to a lot of didoes, I see, and it is always good to keep busy.  But what was it inspired you to start writin books?

It was a very deliberate decision. I've wanted to tell stories since I was a kid, and I started writing and drawing my own books when I was six years old. I've had other interesting jobs from time to time, from an educator in the paleontology gallery of a museum, to acting on stage and working as an extra in film, as an illustrator, and even a short stint as a stage magician. Writing fiction has always been the most driving creative force in my life, and I always kept coming back to it. I feel very lucky to be a professional writer.

Well, everyone should do what they is good at.  What is your future plans for the Halloween Legion? Are you doin some other writins of interest? 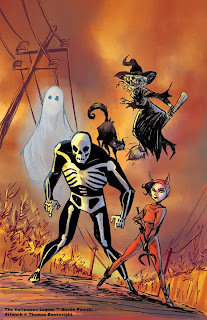 Since you is obvious likin Halloween, what was your best Halloween ever?

Last Halloween was the best ever. But I know the next one will top it. And so on. We should always strive to make our best memories today.

Yessir!  I got one more question: What kind of advice would you give to someone else who was writin somethin?

The best advice I can give new writers is simply to write. Write as much and as often as you can. Try to write a short story per week, if possible. Don’t be so concerned about style or even quality at first. Just write in a way that feels natural to you. That’s the only way to hone your craft and develop your own unique voice. Then, at the end of the year, you will have written over fifty stories and at least a few of them will be pretty special. Also, turn off the TV and the computer games and read. Read a lot. Short stories, novels, comics, everything. And not just modern stuff. Read Poe, Shirley Jackson, O. Henry, H.G. Wells, and Edgar Rice Burroughs. These are master story-tellers, who practically invented the specific genres that have become so popular today. Modern writers would be nothing without these illustrious trailblazers, whether they admit it or not.

Now that there is right smart advice.  Mr. Powell's The Halloween Legion can be found out to that Amazon.com in both a book and a Kindle e-book, and I am here to say that you should get you a copy right quick, even though it ain't Halloween right now.  I hope you will visit Mr. Powell here on the Internet gadget and keep up with his doins, cause he is writin some good stuff what's fine for a summer read.  I shall be goin here now, but be sure to come on back because it is always one thing and then another here to the Monster Shop and it is anyone's guess whatever next.  Blessings be on you all!