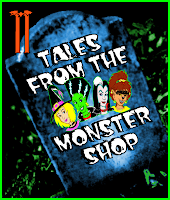 Hey you guys! This is your favorite werewolf Harriet Von Lupin, and welcome to The MonsterGrrls' Thir13en For Halloween! Man, I am so stoked about our new feature, 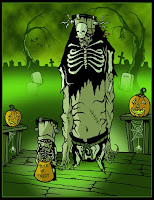 Tales From The Monster Shop! This means we get to talk to groovy Halloween people and learn about how they do Halloween!
Today I'm talking with Eric Pigors, a former animator (that means "guy who makes cartoons") for Walt Disney Productions who is now doing his own thing called Toxictoons, a series of weird, creepy and goofy monster characters who are all over his own line of T-shirts, prints, stickers and all kinds of stuff! He's also created five art books about his characters, and we're gonna find out some more about his way-cool creations!Dude, thanks so much for joining us on The MonsterGrrls’ Thir13en For Halloween, and your Toxictoons really ROCK! Tell us a little bit about yourself and what you do. 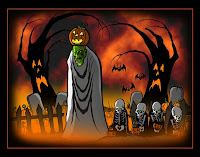 I'm Eric Pigors, creator of TOXICTOONS. I draw weird creepy artwork, mostly monster stuff like Frankenstein, sexy Vamps, Halloween-themed art. I used to work in the animation industry, until it went 3-D and they gave up on hand-drawn films. Then I took my savings and invested it into making my own shirts, artbooks, stickers, prints--you can see it all at www.toxictoons.com.
That's right, and it's all majorly cool! But Mad Doctor told me you‘ve done Disney animation. Where did you study to become an animator, and what kind of classes did you have to take?

I went to a small school called Brandes Art. It was taught by some of the artists who worked for Walt Disney Animation. I took life drawing and basic animation classes. The school doesn't exist anymore. I wanted to go to Cal Arts, which was started by the Walt Disney Studios to teach animation. It's even about 5 miles away from where I grew up, but it was too expensive. So I went to the other school for 2 years. Then I just tried to get hired anywhere to learn and get paid while learning. Which is the best way to go! No student loans!

My first animation job was on The Legend Of Orin in 3-D. This was in 1985 I think, when 3-D was wearing the goofy glasses that made the film look like a View Master 3D art. Not CG like nowadays!

Then I worked on the CareBears Adventure & Jem, the 2 biggest low points of my animation career. But everyone has to start somewhere and it's usually not at the top! Then I worked on the Family Dog pilot for Steven Spielberg's Amazing Stories TV show, designed by Tim Burton. This project was right up my alley!!!

Then I got lucky and got into Disney Animation on Oliver And Company, and I worked there through their 2nd golden age period for 15 years straight on films like Lion King, Aladdin, Little Mermaid, Tarzan, and Hercules--I drew Hades which was my favorite character to work on there. Then on Treasure Planet, I got to do some character designs as well as working on Silver. He was a blast. And they picked one of my designs and named it Pigors after me. He has 4 legs, gnarly teeth and a tentacle eye. He is one of the background alien pirates.
Wow, so you were on some of Disney's greatest hits during that period! Mad Doctor loves Treasure Planet--he'll have to look for Pigors the pirate! But what artist was a major influence on your work and why?

Well, there have been a lot. Dr. Seuss, B. K. Taylor who drew the ODD ROD Stickers in the 1970s, Ed "Big Daddy " Roth who is a huge influence to me and lots of artists my age. Then on to the artists at MAD Magazine--Jack Davis is my favorite artist from MAD, with Don Martin, Bill Elder & Basil Wolverton a close second. And all the other artists at MAD Magazine. They all had their own unique styles, which is good for an artist to try to acquire to set your work apart from everyone. I loved the monster cards called "YOU'LL DIE LAUGHING" that Jack Davis drew, and his EC Horror comics artwork I love as well. 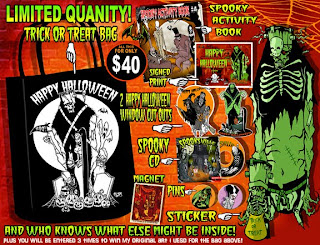 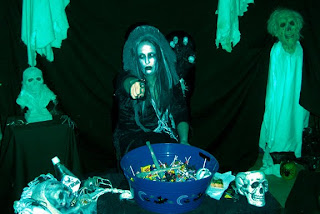 Cool. So let's talk about your personal life. You are mated* to the lovely Denise Pigors. Does she help with your artwork or inspire you in any way? (*MAD DOCTOR'S NOTE: "Mated" is werewolf terminology for marriage.)

Well, a lot of fans ask if she is the girl I draw with the dreads all the time. She is in there with a little Vampire and Lily Munster. Plus when I first met Denise, I started to really notice my own artworks style form into what became Toxictoons. So yes, you can say she inspires me. And she wrote a few of the poems in my Deadtimes Story Book. Most fans like her poems the best in the book.


Okay, so Frankie wanted me to ask you this next one. There’s a recurring Frankenstein-Creature theme in your work. What inspired that?
Frankenstein and The Bride of Frankenstein are two of my all time favorite horror movies. And The Munsters is my favorite TV show. I just really love drawing Frankenstein's monster. I think also Frankenstein's Monster is the coolest looking Monster of all, as far as I'm concerned!

At your Toxictoons website, you've got T-shirts, Trick-Or-Treat bags, cool prints, a DVD and all kinds of stuff. What are you gonna do next with Toxictoons?
Well, the goal is a Halloween special one day. But right now I had my first Toxictoons monster mask come out which is a nightmare come true for me!! I have a few more masks for 2011 that www.trickortreatstudios.com plans on doing, besides my first "GRUESOME" Monster mask pictured here.
But I will always be doing new prints and new shirts. Posterpop is putting out 17 new stickers on October 1st. I would love to do another art book, but money is tight these days and it's over 100 pages of new color art I can do in my next book. 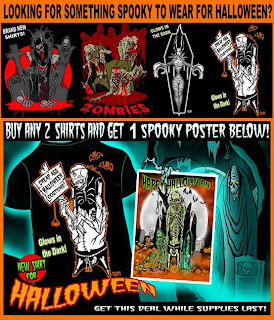 One last question: What’s your favorite memory of Halloween as a kid? How are you gonna celebrate Halloween this year? 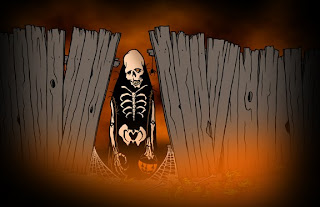 I was around 12 or13, I think, I had just bought my first record, Disney's Chilling Thrilling Sounds record. And I listened to it only once before I excitedly ran out to show my friend it, and watched the record slip out and smash into pieces on the floor. My friend's dad worked for Disney building stuff for Disneyland.
Well, my friend and I both went trick-or-treating around 1974 or 75 I think. And we were determined to go to every house in my mom's neighborhood and get as much candy as we could. That's the year I saw a few haunted houses. The first house had the Universal Monsters roaming around through fog, colored lights, and I didn't want to walk to the door to get my candy I was so scared!
But the one house I remember to this day was playing that same 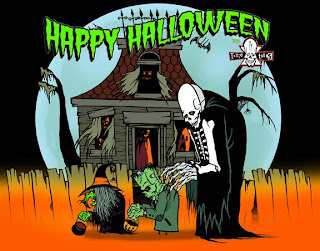 Disney sound-fx record in their garage. I walked through their yard and heard the heartbeat or alien part as I walked up closer to their gates to the house. It was dark, and I had to go through this gate and walk 15 feet to a pitch black doorway with only a jack-o-lantern lit for light. So I walked really slowly looking behind the bushes and waiting for something to jump out and scare the crap out of me. Nothing happened so far. Then I got to the door and knocked, then I knocked again. No one answered the door, so I turned and ran out of their gate as fast as I can in case something was hiding. Then I went to the next house and kept filling my pillow case all night. I remember that house because of the scary sound-fx record playing and the pitch black darkness, as well as my imagination of what was hiding in the darkness to scare the crap out of me! It's funny how not seeing anything could be more scary than what you see.

And now I do the same thing to Trick-or-Treaters in my mom's neighborhood. I deck out my mom's garage and give them something spooky to remember and maybe pass along when they get older. 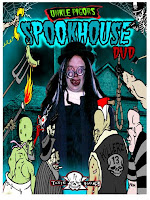 You can see 45 minutes of my spookhouses over the years on my Unkle Pigors Spookhouse DVD, as well as a nice interview horror host ORMON GRIMSBY did with me on my artwork and lots of other stuff. HAPPY HALLOWEEN!!!

And that's the skinny on Eric Pigors, gang! I had a blast talking to the Toxictoons Master, so be sure to check out his cool website at www.toxictoons.com, and maybe get some cool Halloween stuff so he can do that next art book!

See you later on The MonsterGrrls' Thir13en For Halloween!! OWWOOOOOO!! 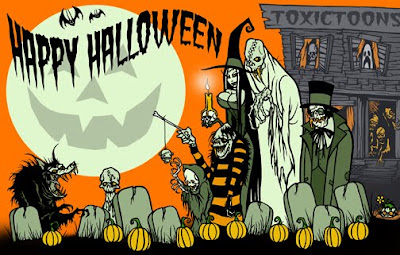 Posted by Harriet Von Lupin at 6:00 AM No comments: