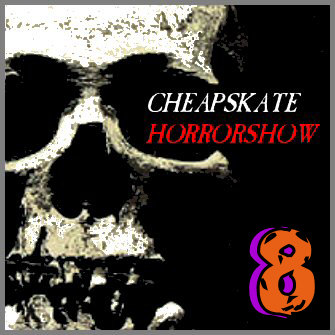 Welcome back to The MonsterGrrls' Thir13en For Halloween, and this is your Mad Doctor.  Today we're introducing what we hope will become a new regular feature on MonsterGrrls.com: Cheapskate Horrorshow, featuring reviews and overviews of favorite horror films including those in the categories of the weird, the wonderful, and the wacky.  Today we'll start with a film that was remade recently (much to our consternation): Sam Raimi's The Evil Dead.

I can't fully explain to you why I love The Evil Dead. It's a gorefest of the first order: a violent, insane, raving, incredibly ghoulish film with much blood and horror, which usually isn't my cup of tea. But there is something about this film that makes it one of my favorite horror movies. Perhaps it's the simplicity of its story. Perhaps it's the fact that its characters were different from other horror movie characters of the day, in that they were not just cannon fodder; instead, you cared about what happened to them even after the mayhem started. Perhaps it was the cool stop-motion effects shown at the end, when all the zombies started decomposing really fast. But I'm getting ahead of myself.


I grew up in the eighties, where serial killers, slashers and gore were the order of the day in horror movies, meaning that as a committed fan of classic horror and Universal's Big Seven (Frank, Drac, Wolfie, Mummy, The Bride, Phantom, Invisible Man and Blacky Lagoon), I was usually left out in the cold or forced to watch the same stuff others were watching. Yeah, I saw Freddy and Jason and a good many of their sequels just like the rest of you, but it doesn't mean I liked them. I was often left unsatisfied by these movies, or feeling as though something was generally missing. Like fun, for one thing.

But The Evil Dead is different. For one thing, it was made on probably the shoestring budget to end all ($375,000; not even pocket change these days by Hollywood standards) by people who had very little idea of how to do some aspects of moviemaking correctly, in the worst conditions possible. The film's director and star, Sam Raimi and Bruce Campbell, had been friends since their youth and had made Super-8 films together. In college they teamed with friend Robert Tapert (who is now Mr. Lucy Lawless and head of Renaissance Pictures, producers of Xena, Warrior Princess, Hercules: The Legendary Journeys, and... The Evil Dead movies), and after making a short film, Within The Woods, they were able to secure funds to create The Evil Dead. Filming began in a small cabin in the woods of Tennessee and continued over the next four years. The madness of this process has now become legend: during the time it took to make this film, many of the cast and crew abandoned the production, forcing Raimi to use stand-in actors as replacements.

Upon its completion, the film struggled to find distribution due to its graphic violence and gore, and the MPAA slapped it with an NC-17 rating. It was widely banned in several countries including Ireland and Germany, but a showing at Cannes caught the eyes of both Stephen King and John Bloom. The latter, in his persona of drive-in-movie reviewer Joe Bob Briggs, promoted the film with foam-mouthed aggression, and King gave it a glowing review in the November 1982 issue of Twilight Zone. It has since gone on to become a cult classic and a direct inspiration for many of today's horror filmmakers, sort of on a par with The Texas Chainsaw Massacre (though, in both production values, story and character development, Evil Dead is the better of the two).

The story of The Evil Dead is pretty simple: five young people go on a weekend jaunt to the woods, planning to camp in a cabin. Upon arriving, they discover a tape recorder and some archaeological artifacts, one of which is an odd-looking book with a screaming face for a cover. Playing the tape, the group hears the recorded journal of a professor, which explains that the book is Norturum Demondo, an ancient Sumerian text with rituals for raising the dead. Of course, this journal features a recitation of some of the book's incantations, which is never a good idea. (Handily, it also tells how to get rid of what is let loose by your messing around with Stuff You Weren't Meant To Know—but more on that in a minute.)

Cue supernatural mayhem. One by one, various terrible things happen to the five. A girl is driven out into the woods and attacked by the woods, then possessed. The others become possessed by turns, and with their souls destroyed by the evil forces that have been unleashed by the tape, the resulting corpses are then reanimated into zombies—and not ordinary zombies, either. These are not the doddering brain-hungry zombies of Night Of The Living Dead, or even the fast rage-fueled hyperdrive models of 28 Days Later; instead they are lucid, squirming, scrabbling, ranting demon-possessed zombies who want someone's soul on a platter. The survivors of the first initial assault slowly realize that the rest of the information on the tape is true; to kill these zombies, the corpses have to be dismembered completely before burial. One by one, the group perishes until only one is left alive—Ash (Bruce Campbell), the nice guy of the group, who spends the rest of the movie being driven bananas by the demons, and must survive until daybreak.

This is probably part of why I can get onboard with The Evil Dead. It has a supernatural element, which is something that is missing from most modern horror. Many of today's horror films talk a good game about paranoia, terrorism, technology and other fears of today being the driving motive of their films' plots, but more often than not the plots seem to be constructed around the phrase shit happens, which in my opinion makes for lousy filmmaking. To suggest that there is something bigger than humans, such things as true good and true evil, or that we may not be the only beings in this universe can usually get you laughed out of the horror show these days.

Evil Dead doesn't buy into this notion, which makes it, the Re-Animator films and most of the Full Moon/Charles Band/Empire Pictures oeuvre the only horror films I could really get behind in the eighties. These movies don't rely on some colorful serial killer/anti-hero; instead, they're about monsters. This movie is satisfying to me because the evil dead really are evil dead, instead of being nihilistically charming comic-book villains who crack jokes and caper about, or silent unstoppable killing machines without a grain of character. If the zombies in The Evil Dead got into a fight with the Living Dead zombies they'd not only win, they'd also eat the losers.

And that's it for our first Cheapskate Horrorshow.  Join us tomorrow on The MonsterGrrls' Thir13en For Halloween for more discussion of mayhem and monsters, including that one behind you.  Made you look!
Posted by John Rose at 3:01 PM 2 comments: