AND COMING NEXT YEAR FOR HALLOWEEN... By John Rose

Today is the last day before Halloween, and we have some thrilling news... after years of waiting, fans of Boris Karloff's Thriller TV series can now rejoice, for Thriller is coming to DVD and will be here by next Halloween! 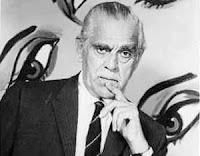 Premiering in 1960, Thriller adapted many tales of famous horror and mystery writers such as Edgar Allan Poe and Robert Bloch for the small screen.  Hosted by none other than Boris Karloff, he of such famed classic horror productions as Frankenstein and Black Sabbath, Thriller is now regarded as a watershed production by horror fans (including no less than Stephen King, who saw fit to mention the series in Danse Macabre, his 1981 overview of horror's influence on film, radio, TV and other media).  Many have waited for this series to hit DVD, and Thriller will now see its DVD debut from Image Entertainment, in a completely remastered collectors' edition with all 67 episodes.  It will be the first time Thriller has been released on DVD anywhere in the world.

Though we have no information on a release date as yet, our info comes to us from the website TVShowsOnDVD.com, which regularly tracks upcoming DVD releases.  Keep an eye out for a release date soon.

Join us tomorrow for the big day on The MonsterGrrls' 31 Days Of Halloween, same bat time, same bat channel!
Posted by John Rose at 8:14 PM No comments: