ATTACK OF THE HORROR HOSTS: THE BONE JANGLER By Harriet Von Lupin 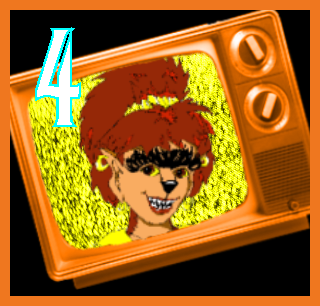 OWW-WOOOOO!! Hi there, Halloween hootenanners! (Is that even a word?) This is your roving werewolf Harriet Von Lupin with The MonsterGrrls' Thir13en For Halloween, and we're doing the Attack Of The Horror Hosts today with a really super-cool bone-daddy dude from the Windy City of Chicago, the glorious and notorious Bone Jangler!

This happening haunter is the host of not one but two kooky-spooky shows: The Bone Jangler, his regular 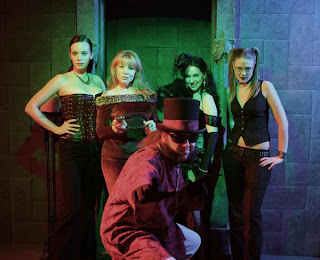 nighttime horror-movie show that features his glamorous paramour the Enchantress Nocturna and his cavorting Coven Girls, and The Bone Jangler's Daytime Dungeon, a daytime edition for all ages that shows cool old cartoons with the Jangler, Nocturna, and Young Master Gregory, his "Earth nephew" and dedicated monster kid! Gang, it's time to hang with the Jangler!!

Welcome to The MonsterGrrls' Thir13en For Halloween, Mr. J! Please tell us about yourself and what you do!

I am an immortal, omnipotent, omniscient (as I choose to be at any given moment) being from Beyond whose attention was drawn to your Earth by the Big Bang that spawned this universe. I decided to stick around and have some fun. 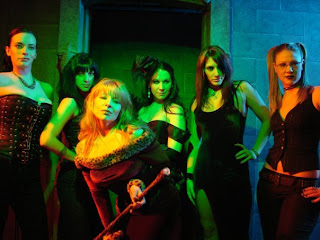 Groovy! But since you got here on Earth, you now have an entire Coven to do your bidding. Are they merely minions or equal partners in your bid for world takeover?

Well, I am the king of my castle, you know? But I like to treat everyone, or my people at least, equally. The Coven Girls are here to please Nocturna and I, and each other. We're a bunch of badasses, basically.

You also involve family members in your show, and have a family-themed edition of your show. Can you elaborate?

My Earth nephew Young Master Gregory co-hosts our afternoon program, The Bone Jangler's Daytime Dungeon, and has done so since the second episode of that show. He was five years old at that time, and I 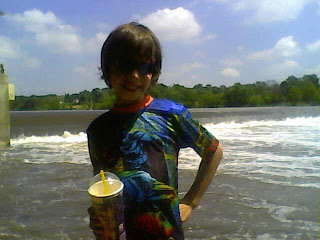 created that show just for him, in a way.

When we shot his first appearance, he'd been diagnosed with an extremely rare condition that only 1% of people get, and only 1% of people survive. His first appearance could easily have been his last. He underwent extensive cranial surgery just 8 days after we taped that show. He is a miracle boy, and he is loved by so many from all over your world. 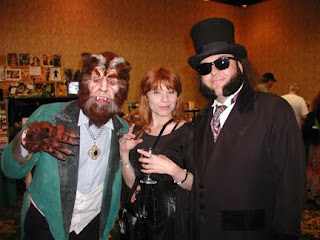 So utterly cool! We love monster kids, and the MonsterGrrls give a shout-out to the Greg-ster! But how did you get started as a horror host?

I had been trading tapes of past and present Horror Host TV shows for a few years, and had amassed quite a collection of them. One day, whilst watching The Son Of Ghoul Show, the thought crossed my mind that Nocturna and I would be naturals, as we truly lived the life that these actors were portraying in these shows. We recently celebrated the 10th Anniversary of our nighttime show, and the 6th anniversary of our daytime show.

Marvy fab! So, Mr. J, being all immortal and stuff, and having been around in the Horror Host biz for so long, this next one's kind of a given. How do you feel about the state of horror movies today?

And that's just the way we feel, too! So what is your favorite Halloween memory?

Many of my favorite Halloweens took place in the 70’s. However, I take Greggy trick-or-treating every year, and it's always a good time. 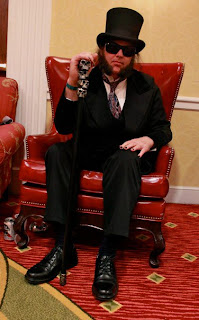 One last share of your mystical wisdom, Mr. J. What does Halloween mean to the Bone Jangler?

For me, Halloween is about the celebration of Autumn, all things spooky, people wearing costumes, eating candy, and sharing it all in a communal experience, young and old, with the emphasis on the spookiness.

Thank you for including me in your Thir13en For Halloween!

Hey, it wouldn't have been a party without you! Thanks for hanging with us!

As you can see, the Bone Jangler is a really cool dude for an omniscient all-powerful alien immortal! If you're not able to catch his show on the tube, you can see his show online at the Monster Channel every Saturday night at 8 PM, 7 Eastern time! And don't forget to return here online for our next installment of The MonsterGrrls' Thir13en For Halloween! Dudes, the Big Day is almost here! OWW-WOOOOOOOOO!!!!!!

Posted by Harriet Von Lupin at 5:08 PM No comments: