Welcome back to today's edition of The MonsterGrrls' Thir13een For Halloween.  Today we're cranking up the Cheapskate Horrorshow to present a review of the movie Ouija.

In 2012, a movie called Battleship was released, loosely based on "the classic board game."  When Hollywood is willing to mine board games for movie ideas, you know something's wrong, but the notion was enthusiastically received among some of the suits, and rumors of movies based on such games as Monopoly and Candy Land began to circle.  (It was only because common sense prevailed that no one mentioned Scrabble: The Quest For the Triple Word Score.)  Horror movies, however, don't really have anything except... the Ouija board.  So, cue short history lesson:

Ouija boards, or "talking boards" as they were once known, have been around since the 1890's, when the Spiritualist movement began to rise in America.  As Spiritualists attempted to communicate with the Great Beyond, businessman Elijah Bond had the idea to package together a planchette (a device used for automatic writing) and a board with the full alphabet and numbers on it, so that Spiritualists would have a better way of communicating.  Bond's employee William Fuld took over production and eventually started his own production of these boards under the name "Ouija," which Fuld claimed was an Egyptian word meaning "good luck" that he got from using the board to communicate with a spirit.  (Actually, it's the French word "oui" and the German word "ja," both of which mean "yes," put together to create "oui-ja.")  Fuld eventually sold the business to Parker Brothers (now owned by Hasbro, which actually has a film division who is responsible for this movie) and it wasn't long before Ouija boards were terrorizing parlor gatherings and slumber parties everywhere.

Neither the MonsterGrrls nor the Monster Shop advocate use of Ouija boards (Punkin has stated that they "don't even make a good cheese-cuttin' board"), and this movie is, in part, a whole series of reasons why. Opening with a flashback of best friends Debbie (Shelley Hening) and Laine (Olivia Cooke) playing with an Ouija, we learn Rule One of Ouija Use: do not play alone.

Shortly after, we move to the present, where Debbie is seen burning an Ouija board in the fireplace.  After turning down an offer of a night out from Laine, Debbie is possessed by an evil spirit and forced to commit suicide in her home, meaning that Rule One is often the first to be broken (at least in horror movies).  Laine, not believing that Debbie committed suicide of her own volition, recruits friends Isabelle (Bianca Santos) and Trevor (Daren Kasagoff), little sister Sarah (Ana Coto) and Debbie's grieving boyfriend Pete (Douglas Smith) to investigate the house, where they find the mysteriously unburnt Ouija board.  Deciding to contact Debbie for one last goodbye, Laine and crew instead contact something else, which starts leaving them messages... and not through the Ouija board.  Trying to shut things down, Laine is instead exposed to a deeper mystery involving the previous owners of the house and the Ouija board, which leads to her friends dying one by one and a race against time to solve the mystery behind Debbie's death and stop the evil spirits before everyone is dead.

Again, like Stay Alive (which we previously reviewed here), Ouija involves college-age protagonists rather
than teens, which seems to be a trend in horror movies of this age.  Unlike that movie, no one receives much character beyond Laine (who, though typically morose, is the heroine and cannot be one-dimensional by default), Sarah (who grinds the rebellious-teen archetype into our faces each scene, as if the audience cannot be bothered to figure it out) and victim Debbie, who seems to be an all-round good girl (which is meant to make her death much more tragic, but instead just makes you wonder why she started using the board in the first place).  The movie is not particularly unpleasant or boring, and moves briskly along plotwise, working its elements in as it goes and making the most of its mystery.  But do not expect to be overtly terrified; this movie is not Grand Guignol horror.  What you've got here instead is a nice Halloween-friendly potboiler that you can throw in the DVD player or stream after a trick-or-treat session.  (And of course, we do not advise using an Ouija board during the movie.  If you're that bored with it, turn the DVD off and play cards or something.)

Don't forget to come back for our next installment of The MonsterGrrls' Thir13en For Halloween!
Posted by John Rose at 4:39 PM No comments: 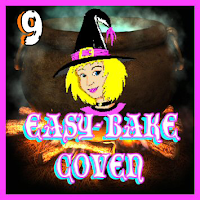 Hey, y'all, and welcome to The MonsterGrrls' Thir13en For Halloween!  This here is Petronella Nightshade, what am Punkin, postin to you through this here blog.  Us will be bringin you all kinds of things and first one thing and then another, so be sure you are keepin up with us.  Today I am doin the Easy-Bake Coven, and bringin you a recipe for Injun Corn.  It ain't actual Injun, but that is all right.

A lot of folks make them crispy rice cereal treats around Halloween, what is crispy rice cereal and butter and marshmallows all mixed up together.  This here is somethin like that, but it uses that peanut butter and chocolate puffed-up cereal, and it put me to mind of what Sam the scarecrow who lives down the hollow from us in Witchhazel is doin with popcorn, which is growin ears of popcorn what's already popped, and some of em even got butter.  Don't ask me how he does it cause I don't know, but anyway, this is somethin that's pretty good for your young ones at Halloween.  Harriet specially liked it cause she loves peanut butter and chocolate.

What's In It:
1/4 cup of butter or margarine (for pers'nal preference, I like butter best, and it's about half a stick)
1 package (10 1/2 ounces) mini-marshmallows
Some yellow food coloring (I like that gel colorin, cause it gives better color and don't have no funny taste)
8 cups of peanut butter and chocolate puffed corn cereal
1 cup candy-coated chocolate pieces (like M&Ms), divided in half 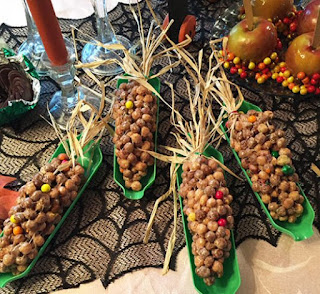 What You Got To Do:
Line up a large bakin sheet with waxed paper and set it aside.  You won't be bakin nothin, but you'll need this to set the corn on, and the wax paper will keep it from stickin to the sheet.

Melt up your butter in a cauldron or a big heavy saucepan over low heat on the stove.  Add your marshmallows to it and stir it up till it's all melted and smooth.  Tint this with your food colorin until you get the shade of yellow you want, and then add your cereal and 1/2 cup of your chocolate pieces.  Stir this all up until it's evenly coated, then take it off the heat.

Butter or grease up your hands and divide this mixture up into 10 oblong pieces.  You got to work quick afore it cools down too much.  Stick a lolly stick about halfway into each piece, and then shape em up like ears of corn.  Place em on your bakin sheet and press the rest of your chocolate pieces into each ear.  Let em set a while, then tie or tape the raffia to the lolly sticks so it looks like a corn husk.  If you want some variation in the chocolate part, you can use the ones that's got peanuts* in em (I like those), and they is makin a lot of other kinds now, such as ones that got pretzel bits or crispy rice bits in em.  Just do as you like.

And that's it.  I shall be bringin you some more recipes as we are goin along, and I hope you try some of em and have some fun with em.  Come back round for what we shall be doin next with The MonsterGrrls' Thir13en For Halloween, and blessings be on you!

*SPECIAL NOTE: Some little ones has got peanut allergies, so if you are thinkin of makin these for a young ones' party, ask round the other mamas afore you do them.  We don't want nobody goin to the hospital on Halloween.  Unless it's an old abandoned hospital what used to be a mental asylum and someone's throwin a party there.  Course, that might be somethin else altogether.  --P.N.
Posted by Punkin Nightshade at 4:07 PM No comments: