MONSTER SHOP BULLETIN: TOONS FROM THE CRYPT!! By John Rose 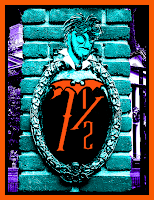 Welcome back to The MonsterGrrls' Thir13en For Halloween, and here's another Monster Shop Bulletin fresh from the slab--the WB Shop, Warner Bros' online store and video outlet, is making three spooky Hanna-Barbera cartoon classics available just in time for Halloween!  Produced as made-on-demand DVDs, these three toons have been wanted for years from a number of interested fans and cartoon completists, but have not warranted enough interest for a full-on DVD release.  However, Goober And The Ghost Chasers, The Funky Phantom, and the 1973-74 animated series of The Addams Family are now being released.  These titles will only be available from the WB Shop, and only in the United States.

Goober And The Ghost Chasers premiered on the Saturday Morning schedule in 1973, boosted by the popularity of Scooby-Doo, Where Are You!  Filled with spooks, scares and slapstick, the series was about Ted, Tina and Gilly, a trio of intrepid reporters from Ghost Chasers Magazine who set out on assignment every week to prove the existence of various ghosts, accompanied by their snarky and chicken-hearted dog Goober, who had the ability to become invisible (showing only his red stocking cap) when frightened by ghosts.  While the series' dynamic was quite obviously lifted from Scooby-Doo, several major differences were present, such as Goober's disappearing act, team photographer Gilly's unrelenting obliviousness to danger (which often provided much of the comedy), and the fact that the ghosts featured in each weekly mystery were usually real.  There was also the added appeal of the then-popular Partridge Family Kids, who appeared often on the show and were voiced by their real-life counterparts Susan Dey, Danny Bonaduce, Brian Forster and Suzanne Crough.  Goober himself was voiced by ventriloquist Paul Winchell, who had already made a name for himself to Saturday Morning fans back in 1968 and 1969 with his work on Wacky Races and Dastardly And Muttley In Their Flying Machines.

The Funky Phantom materialized back in 1971, also inspired by Scooby and Co.  This series followed the adventures of three teen friends named Skip, Augie, and April, who ventured inside an old house one night with their faithful dog Elmo to escape a storm and found a distended grandfather clock.  When the hands were set to twelve midnight, the clock released the ghosts of one Jonathan Wellington "Mudsy" Muddlemore and his pet cat Boo, two Revolutionary-War-era patriots who had hidden inside the clock from British soldiers and, unfortunately, were unable to get out.  Mudsy and Boo accompanied the three teens (who, conveniently, had a mystery-solving bent) and Elmo on their adventures, and despite the fact that Mudsy was something of a coward, he always helped the gang out when they were in trouble.  Mudsy was voiced by Daws Butler, who had previously voiced the bon-vivant lion Snagglepuss on Quick Draw McGraw and Yogi Bear, and Mudsy's voice is a dead ringer for Snagglepuss (even).

1973's animated rendition of The Addams Family also has ties to Scooby-Doo.  Before receiving their own cartoon series from Hanna-Barbera, the Family guest-starred on The New Scooby-Doo Movies, which led to a demand for their own series.  With original Addams actors Jackie Coogan and Ted Cassidy (who had also voiced Frankenstein Jr.) reprising their roles as Uncle Fester and Lurch, this series found the Addamses traveling the country in an RV version of their creepy Victorian manse (which dug its own moat with a built-in automatic excavator wherever it stopped), and helping out some of the folks they met along the way.  Drawn to the specifications of Charles Addams' famous characters, this series lasted for three years of Saturday Mornings before retiring, but the Addamses would eventually receive another re-animation from HB in a 1992 series, due to 1991's successful Addams Family movie.

All of these DVD sets will consist of 4 discs encompassing all episodes in each series produced from the best quality masters available, and will not be specifically remastered for these releases (in other words, they're bare-bones--no featurettes and such).  The Addams Family is available right now, while Goober and Funky Phantom will be available on October 26th (just click our title links to order).

We'll be back soon with more Halloween happenings on The MonsterGrrls' Thir13en For Halloween, so don't forget to check back at our crypt...
Posted by John Rose at 12:00 AM No comments: