CHEAPSKATE HORRORSHOW: Review Of I SELL THE DEAD By John Rose

Welcome back to The MonsterGrrls’ Thir13en For Halloween, and today Cheapskate Horrorshow is covering one of the Monster Shop’s favorite modern horror films, I Sell The Dead, the debut film of Irish director Glenn McQuaid.


Though it is a modern horror film, ISTD is a period film set in the Victorian era.  The film opens on the execution day of grave robbers Willie Grimes (Larry Fessenden) and his accomplice Arthur Blake (Dominic Monaghan, he of Lost fame).  While Grimes is dispatched quickly, Arthur is visited in his cell by one Father Duffy (Ron Perlman, doing a scene-chewing Irish brogue) who wishes to record a statement from Arthur to be used as a cautionary tale.


Arthur recounts his career of grave robbing with Willie, which begins in his youth and goes on to fruitful but stagnant fulfillment under the continual threat of blackmail from Dr. Quint (Angus “Tall Man” Scrimm of Phantasm fame), who is using the pair to gain corpses for illegal medical study.

Things take a turn for the better when the two dig up and release a vampire, which leads to the pair deciding to become supernatural-based grave robbers, a new apprentice/love interest for Arthur, Fanny Briars (Brenda Cooney) and a confrontation with a group of vicious grave robbers known as House Murphy, consisting of disfigured assassin Valentine (Heather Bullock), insane enforcer Bulger (Alisdair Stewart) and their brutal leader Cornelius (John Speredakos).  Under orders from their unseen leader Samuel, House Murphy tries to dissuade the Blake/Grimes team, leading to an eventual confrontation over a shipment of crated undead… and things go mightily awry, because zombies.

I Sell The Dead is a fast-moving and funny movie which recalls the days of Hammer Films’ period shockers, while at the same time being a loving sendup of same.  For a low-budget B-picture, it seems to get the Victorian period right simply by not trying very hard; all the sets, props and costuming have a good feel of hard use and squalor rather than high polish.  Sight gags and anachronistic humor abound; one standout bit of dialogue in particular involves Arthur’s sampling of a new invention called the sandwich (“it’s genius”).  Monaghan and Fessenden are the perfect pair of seedy but sympathetic rascals, and the assorted Murphy clan provide a nice punch of comic-book villainy (helped in no small way by the use of comic-art illustrations in their introductory scene).  The DVD even includes a mini-comic that tells the movie’s story, and special features include commentaries with Monaghan, Fessenden and director McQuaid, plus visual effects and making-of reels.  Give this one a try for Halloween viewing if you want something more modern yet still reminiscent of horror’s gory-glory days.

Be sure to return for our next installment of The MonsterGrrls’ Thir13en For Halloween, and don’t forget to tell the others…

I Sell The Dead is available from Amazon.com and most video rental/online streaming services.  Check it out.

INITIUM: WE'RE BACK, AND ALL APOLOGIES 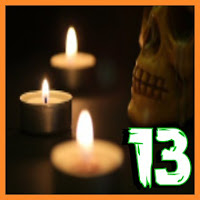 So last year we didn't finish our Thir13en For Halloween.  We got sidetracked.  We got tired.  We got seriously misled by person or persons, and then we were dumped like a cheap latex corpse in a cardboard coffin.  We barely survived.  And Halloween was almost ruined.

But we are back.  And this year, things will be different.  And you'll get some extra posts along with our traditional Thir13en, to make up for our being led down the primrose path.

And, to those who misled us:  We may not have the rights to Halloween, but we definitely have the franchise.  If you would steal away our happiness and our energy and our celebration of our Ghost Wonderful Time Of The Year, just remember one thing:

Halloween is coming.  And so are we.