ATTACK OF THE HORROR HOSTS: NICOLETTE LEWIS AND SASHA TRASHA OF MONSTER MADHOUSE By Punkin Nightshade 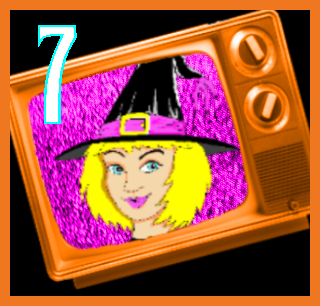 Well, howdy again, and welcome back to The MonsterGrrls' Thir13en For Halloween! This is Petronella Nightshade, what am Punkin, doin another one of our Attack Of The Horror Hosts. Today I am speakin with 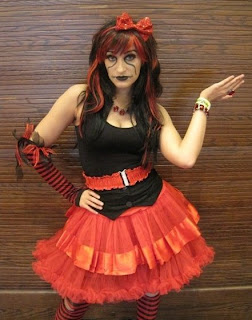 Monster Madhouse is a durn good show, and we watch it ever time we can. It's another of them TV shows what hosts old horror pictures, and it features a crazy monster-huntin feller named Karlos Borloff who's got him a whole passel of other horror hosts helpin him out hostin them pictures. Mistress Nicolette, who is playin Sasha, is one of them hosts, and here we sat a spell and she told me all about it and about some other things she is doin, so here 'tis.

Hey there! Welcome to The MonsterGrrls' Thir13en For Halloween, and can you tell us a little bit about yourself?
This is an interesting question. I usually get "So, tell us about Sasha!" Well, I was born and raised in Brooklyn, 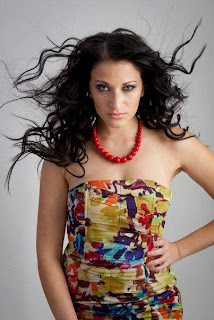 New York. I moved out to Northern Virginia about five years ago. I work as an assistant pre-school teacher. I have six siblings, four of which are quadruplets! I have a boyfriend whom I've been with for almost seven years. In my spare time, I am Sasha on Monster Madhouse. I also enjoy singing, dancing, reading and I do my nails religiously every Sunday! When I am not at work, I wear high heels everywhere I go and if you haven't noticed already, I'm pretty funny! (laughs)

Obviously you are a right stylish lady. But who is Sasha Trasha, and how did she get started hostin horror pictures? How did you meet all them folk at Monster Madhouse? 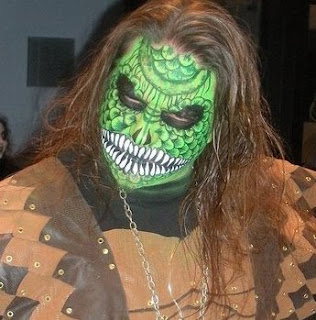 It's actually a funny story. On Halloween about three years ago, I decided that I wasn't going to get all sexy for Halloween this year, but creepy/scary instead. I put my costume together piece by piece trying to figure out how to master the dead doll look- and voila! I went out in Arlington with a few friends to a party then after we went into Fairfax and ate at Denny's. When I went outside I saw a guy whose face was painted like a lizard (Lizardman). I said, "Wow! Cool make-up dude! Did you do it yourself?" Lizardman said he did and I was badgering him about how long it takes for him to do that. Meanwhile, out walks this guy who had black tear streaks like I did. I said, "Hey! Look! We have the same make-up.. sort of!" That 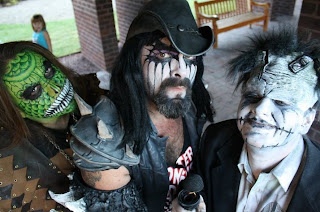 was Borloff. We got to talking and he asked me if I would like to be on his show. I was sort of skeptical like "Yeah, right," but I went out in November to their next taping and had a blast. Before I went on set he told me I needed a name for my character. I went into the bathroom and thought and thought and thought and then BAM! Sasha... my boyfriend speaks Russian and what's a good Russian doll name? Sasha!

And that is leadin right into my next question, cause we hear you is connected with the Washington West Film Festival. Can you tell us a bit about that?
Yes I am! I am very excited about it too. I am the volunteer coordinator for the Washington West Film Festival. The film festival is being held in Reston, opening night is at the Reston Town Center and the other days are at the C.I.T building. This film festival is like no other. I got involved with it through my pastor from Dulles Community Church, Brad Russell. We were talking outside of church one Sunday and Reston came into the conversation and he began telling me about the film festival. I had this strong desire to be a part of it somehow, but I never imagined he would sign me on in the capacity he did. I am so grateful for that. I have big hopes for this film festival and want it to become as big as the Tribeca Film Festival, or Sundance. What Brad is doing with this is amazing; 100% of all the general screenings proceeds are going to groups that help people in need. This year, it is going to a group who have made a feeding center/movie theater in Haiti. It is such an honor to be a part of something this special. Tickets for the Washington West Film Festival are on sale now.

I hope a lot of folk who like movin pictures come to see it. But since you are helpin to host scary pictures, what is your favorite scary picture? Do you like the older scary movin pictures or do you like them new ones better?
I don't really have a favorite scary movie. Scary movies creep me out and get my mind running in all directions (laughs)... but I do watch them and I like the new horror movies better. They are more modern and the special affects are amazing. 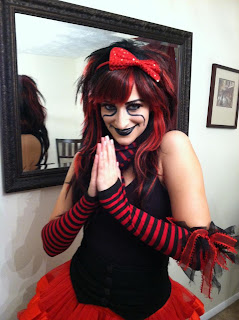 There is just something about Halloween night that is insane. The crisp breeze and the smell of the air. Somehow the streets seems to be deserted even though kids are trick or treating. Leaves crunching under your feet. The feeling of being spooked, and you know deep down in your heart that Freddy or Jason is not going to run you down and kill you but somehow you still turn around real quick at every sound behind you.

What's your favorite memory of Halloween?

The best part of Halloween for me that I love till this day and always remember is getting ready. Putting the make-up on and transforming into something other than myself.

What will you do this Halloween?
KILLING!!! Oh God! Sorry! Sasha got in there for a minute... I will probably be handing out candy; I have no plans as of yet, this year. Sasha, however... well, she can turn up anywhere!

So that there is what Mistress Nicolette had to tell me, and I am bettin you can see she is a mighty smart lady. Karlos Borloff has got him a nice deal on his website (which you can get to by clickin on the title link up there) where you can pick you up a bunch of episodes of Monster Madhouse on DVD and see him, Mistress Sasha, and all the other crazy Madhouse folk in action. It is a right fine old time and would be somethin good to play at a Halloween party, so go on up there and have a look-see. And if you are livin round them parts and can make it to the Washington West Film Festival, go on up and tell Miss Nicolette and ever body that the MonsterGrrls sent you round.

I shall be goin now cause we have all kind of things to do, but I wish everbody a Happy Halloween season, and hope you will come on back to The MonsterGrrls' Thir13en For Halloween cause it is first one thing and then another here round Halloween time. Blessings be on you!