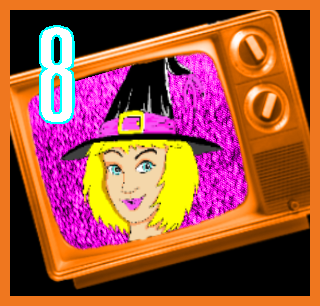 Hey, y'all, this here is Petronella Nightshade, what am Punkin, speakin to you through this Internet gadget for The MonsterGrrls' Thir13en For Halloween, and I am doin another of our Attack Of The Horror Hosts. Today I am speakin with Mistress Marlena Midnite, what is the right pretty hostess of a show called Midnite Mausoleum that is on the television all over the country. Midnite Mausoleum shows a bunch of old classic horror movin pictures what Mistress Midnite hosts, and in 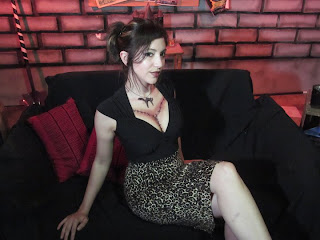 between she and her friend Robyn Graves the mail girl come in and do funny stuff. There is also puppet folk on this show such as Wolfred, who is a puppet werewolf, and there is a Grim Reaper named Grimms who is always hangin around the mausoleum, and ever other kind of thing, so it is apparent that Mistress Midnite has a lot goin on in her show to keep folks entertained. So here I am talkin with Mistress Midnite.

Hey there, and welcome to The MonsterGrrls' Thir13en For Halloween! Please us about yourself and what you do!

Folks say that you are undead. How did this help you become 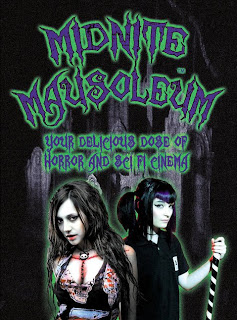 Well, around 80 or so years ago I was involved in a one-car auto accident--I wasn't in the car, mind you. I was crossing the street late at night and I had an encounter with an automobile that left me feeling a bit "flat". Anyway, I managed to do a bit of fast talking with Mr. Grimms Reaper and he allowed me to stay alive (sort of) as long as I stay in or near the mausoleum--although we bend those rules quite a bit. (smiles)

Well, these things do happen. But I suppose you have to bend the rules now and again, cause I found out you also work at a comics shop. Can you tell us about that?

I have a comic store in downtown Clinton, IA; Midnite's Comics. It's a lot of fun--I get to spend all day reading comics and watching movies. It's the best. 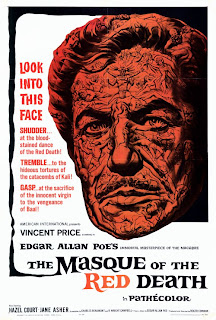 I got interested in horror by watching a lot of the Roger Corman/Vincent Price "Edgar Allen Poe" movies, and my interest grew from there. I really don't watch many newer movies at all, so I haven't seen any of the remakes.

You are on a bunch of stations round the country, but not everbody can see you on their station. Do you have DVDs of your show available?

What was your favorite Halloween costume?

Mine so far was in 2009 when I dressed up as Alan Ormsby from Children Shouldn't Play With Dead Things. 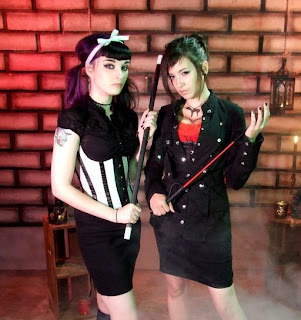 What does Halloween mean to you, and what's your favorite memory of Halloween?

Halloween is a great time to gather with friends and have a great time. All my Halloween memories are great; we have a big party at the mausoleum most years. Autumn in general is my favorite time of the year. It's the greatest!!

So that there is my interviewin with Mistress Midnite, and on her website she has got a bunch of them DVDs for sale, and you can go get some there for your Halloween viewin if you are wantin to watch somethin different, cause it don't seem like there is much goin on where the movin pictures are concerned this Halloween. Still, we got all of our Mad Doctor Mr. John's DVD collection in the Monster Shop, so we are well set up this Halloween. I hope you will all be back soon for our next go-round here on The MonsterGrrls' Thir13en For Halloween, and may blessings be on you and yours this Halloween season!