ATTACK OF THE HORROR HOSTS: THE MOVIE GRAVEDIGGER By Frankie Franken 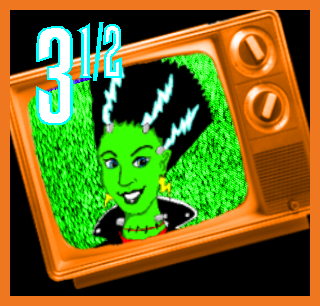 Hello, everybody, and welcome back for our next Attack Of The Horror Hosts post on The MonsterGrrls' Thir13en For Halloween! This is Frankie Franken, and I'm reporting on the very interesting Movie Gravedigger, who is creating his own hosted series of video reviews of your favorite horror movies--and preparing to host horror movies himself! Want to know where the best horror movies are buried? Let's talk to the Movie Gravedigger!

Welcome to The MonsterGrrls' Thir13en For Halloween! Can you please share with our readers about yourself and what you do?
Our current work is a on-going series of video horror-movie reviews that contain a mix of movie footage, commentary, and humor. It is done in costume on our horror set, which is all real, not greenscreen. I am the 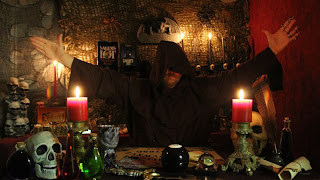 character The Movie Gravedigger, but it is not a one-man show. My son Ryan J. Kinney is a 21-year-old senior at Mercyhurst College in Erie, Pa working on a degree in pre-law English. We co-created the character and overall idea. Ryan writes most of the material as well as doing the photography and editing.

Family shows are always good! Is Movie Gravedigger open to all horror films or a select period?
We cover all periods of horror and include mainstream, uncommon and indy movies in our areas of interest.
What inspired the creation of Movie Gravedigger? How long have you been doing it?
Movie Gravedigger was in the idea stage for about two years. The actual filming work on the reviews just started in August 2011.
Since you are a reviewer of horror movies, what is your viewpoint on the state of horror films today?
Unfortunately, I often find myself leaving the theater disappointed. I do not believe all horror films need to be good stories to be scary, but there does seem to be a lack of well-told stories. I think a lot of the disappointment lies in things being so over hyped that it can't help but be a letdown.
We hear that you may be hosting films soon. Can you share?
Yes. This is actually the first time I've mentioned this in public but we will be hosting horror movies on TV on the Mercyhurst College TV station staring in November or December 2011. Really looking forward to this. We also have plans for several videos that I'm not ready to go into detail on yet.
We wish you good luck! What is your best memory of Halloween?
Oh, so many great Halloweens--so many costumes, so many memories. I've trick-or-treated in rain, snow, cold and warm weather. When I was about six, I had a Green Lantern costume and I got sick and couldn't go out, but my mom salvaged the night by letting me pass out the treats (and of course infect the entire neighborhood). One of my favorite Halloweens was when Ryan was little. My work had us relocate to another town for three years. On Halloween during Year One, Ryan got third place in a school costume contest. On Halloween during Year Two, he got second place and in the third and final year at that school he won the scariest costume. I guess I got better at doing horror make-up.
What does Halloween mean to you?

Halloween is my favorite holiday. Here in northwest Pennsylvania, the leaves change and October is so full of color. We get to dress up as anything our imagination can create and take to the streets or meet up with friends, How great to see what original ideas come from our imaginations! I am all for creating a spring equivalent of Halloween so we don't have to wait a whole year. (Right, like it isn't Halloween for me everyday!) Maybe St. George's Day (April 23rd). Who's with me?!
I'll join you for that, and so will the other MonsterGrrls! What will you do for Halloween this year?
Wow! This year the whole month of October has gone wild. On top of relocating our business, Needful Things Coins & Collectables and operating the business, Ryan is going to school full time. 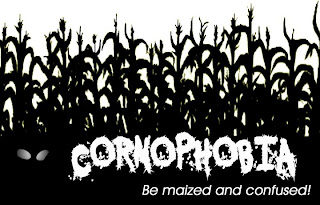 Ryan and I are both working at a local haunt called Cornophobia on Friday and Saturday nights. I do make-up for the actors and play the Movie Gravedigger character at the entrance to the haunt. In addition we will be at the Eerie Horror Fest October 27, 28, 29 & 30th. They really have a great group of celebrities this year, and Greg Ropp and his crew put on a fantastic show every year. 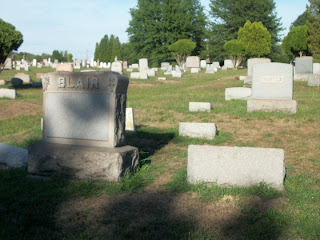 Evan's City Pa. Cemetery where the opening scenes for the 1968 Night of the Living Dead movie was filmed. The building has fallen into disrepair and a group of concerned fans and cast members from the film are trying to save this old building from demolition. To learn more check out "the Living Dead Festival" page on Facebook. 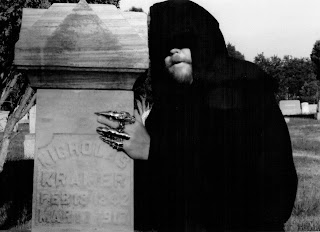 I have a little story about my last visit to Evan's City Cemetery. In August we shot some footage for a future episode of Movie Gravedigger at the Cemetery. A lot of people stop just to take photos. A couple with their children stopped and talked to us they had driven over 500 miles out of their way on vacation just to stop and shoot a few photos. As we were driving away I called out the window in my most ghoulish voice: They're coming to get you Barbara! The woman laughed so hard she nearly fell over a tombstone. Her children and husband were laughing like crazy. I'll always remember that, and I'm sure they will too.

To learn more about the Movie Gravedigger and all the cool things he's doing, just click on the links throughout our post. Needful Things Coins And Collectables is located at 210 High St., Waterford, PA 16441, so if you're in the Waterford area, stop by and tell them Frankie Franken and the MonsterGrrls sent you!

Be back soon for more of The MonsterGrrls' Thir13en For Halloween, because we're coming down to the wire!

ATTACK OF THE HORROR HOSTS: THE PUMPKIN MAN OF FRIGHT NIGHT THEATER By The MonsterGrrls 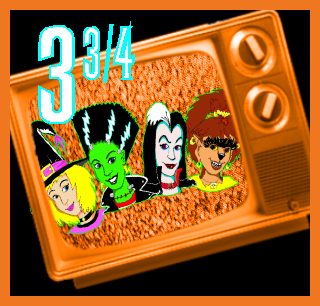 Hello, everybody, this is Frankie Franken and the MonsterGrrls reporting for Tales From The Monster Shop, and today's Attack Of The Horror Hosts post features the very unusual Pumpkin Man, who hosts classic horror movies on his own show, Fright Night Theater. FNT also features classic hard rock and metal songs along with lots of horror-host goofiness, and even though he's really busy around Halloween time, Pumpkin Man graciously sat down for a quick interview with us!

Frankie: Welcome to The MonsterGrrls' Thir13en For Halloween! Please tell us about yourself and what you do. 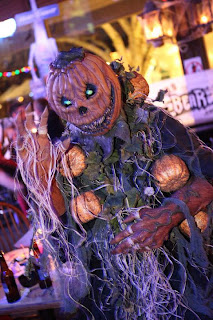 don't look a day over 25. (laughs) Anyway, I love horror movies and the classic Universal Monsters. I love them so much I host a show called FRIGHT NIGHT THEATER!

Bethany: What is the origin of the Pumpkin Man? What inspired you to be a horror host?

Pumpkin Man: I come from long ago when pagans worshipped All Hallows Eve! My inspiration is scaring everyone I can.

Pumpkin Man: Well, I guess if I have to pick just one, it would be Halloween!

Harriet: Cool! That's just about the only modern horror movie we like, although Mad Doc has pretty good taste sometimes.

Frankie: How do you create your show?

Pumpkin Man: I create my show by ad-libbing every damn thing... (laughs)

Punkin: What do you think about all them new remade horror films, Mr. Punkin Man?

Pumpkin Man: Don't get me started on that! I HATE THE REMAKE MACHINE!! Why can't people with original ideas and stories get onscreen? Because Hollywood is a bunch of IDIOTS!

Frankie: What was your favorite Halloween costume?

Pumpkin Man: My favorite costume is mine! (laughs)

Punkin: What was your best Halloween?

Pumpkin Man: Every Halloween is best to me.

Frankie: What does Halloween mean to you?

Pumpkin Man: Halloween means everything to me. It's the only time of the year where the victims come to see me... Wait!!! I mean visitors. Yeah, that's it, visitors come to see me.

And that is our interview with the Pumpkin Man, who can be seen on his own channel at Youtube and at the Horror Host Graveyard! Be back with us for our next installment of The MonsterGrrls' Thir13en For Halloween, and get ready because the Ghost Wonderful Time Of The Year will soon be here!

Sincerely,
Francesca "Frankie" Franken,
Bethany Ruthven,
Petronella "Punkin" Nightshade
and Harriet Von Lupin,
The MonsterGrrls!!
Posted by The MonsterGrrls at 6:00 AM No comments: