Welcome to the Big Day... Halloween,  and The MonsterGrrls' 31 Days Of Halloween is closing out with a review of one of the best Halloween movies to come along in years: Trick 'r Treat.  Written and directed by Michael Dougherty and based on his short animated film "Season's Greetings,"  Trick 'r Treat is not going to please you if you are a fan of Saw, Hostel, or any of the other grim visages that Hollywood usually attempts to bombard you with around this season.  Trick 'r Treat is something different altogether; it is an unabashed love letter to Halloween, scary movies, and Halloween traditions. 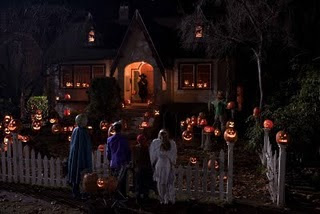 Trick 'r Treat consists of four different narratives, all centered on Halloween night within the town of Warren Valley, Ohio, that are interwoven together.  The common element within these stories is a mysterious little figure named Sam (Quinn Lord) who wears orange pajamas and a burlap mask, and makes several key appearances throughout the film.  Each of the tales is a sort of retelling of a familiar legend of Halloween, from the local school principal (Dylan Baker) who turns out to be that guy you've always heard about who poisons trick-or-treaters, to Kreeg (Brian Cox) the town Halloween curmudgeon trying to scare off trick-or-treaters who gets his comeuppance at the hands of Sam.  Supernatural themes enter the picture with tales of a virginal "good girl" (Anna Paquin) who is attacked by a "vampire" only to reveal that she, her sister and her friends are something quite monstrous themselves, and an urban legend of the "Halloween School Bus Massacre" in which four children attempt to frighten the neighborhood weirdo (Sam Todd) by visiting the site of said massacre, and unfortunately disturbing something.  All of these tales combine at the end, and the film as a whole presents a very old-school, very delightful vision of Halloween and seasonal horror that has roots stretching from early pulp horror comics (which is fitting, due to its nod to Pulp Fiction in style of narrative) all the way to John Carpenter's original Halloween, the Evil Dead series, and Creepshow.  While this film may be quite disappointing to horror fans who love copious amounts of gore and nudity, it's right up the alley of anyone who has ever experienced the simpler pleasures waiting in a late-night creature-feature filmfest.

Strangely enough, this sure-fire winner has never received a theatrical release from Warner Bros, who continuously pushed back its release and finally put it out in a direct-to-DVD release on October 6.  Director Dougherty has suggested that perhaps the film's presentation of violence against children may be the reason, but if people can sit through the first-half all-out orgy and the second-half all-out bloodbath of Hostel, or the irritatingly disjointed aesthetic of such films as Grindhouse and House Of 1000 Corpses, they should not have much problem with the almost-no-gore of Trick 'r Treat.  What gore there is is minimal and, believe it or not, entirely necessary to the plot. 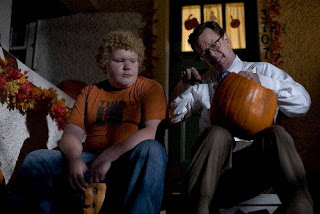 So be told: if you are going to see a film for Halloween this year, skip the latest Saw sequel or Eighties-horror remake, rent (or better yet, buy) this DVD, pop some popcorn at home and settle in for a Treat that has no trick.  This film deserves better press than it's got, and after viewing it you'll see why.

Happy Halloween to all!
Posted by John Rose at 9:22 PM No comments: