ATTACK OF THE HORROR HOSTS: JOHN DIMES AND DOCTOR SARCOFIGUY By Bethany Ruthven 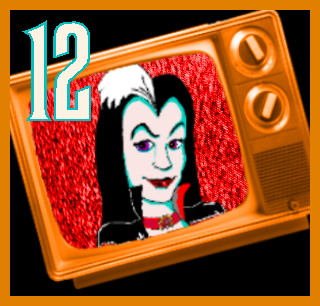 Good evening, darlings, and thank you for reading. The year has come round again, and I welcome you all to this year's edition of The MonsterGrrls' Thir13en For Halloween, where we are showcasing the Attack Of The Horror Hosts! This evening's interview is with a most interesting gentleman named John 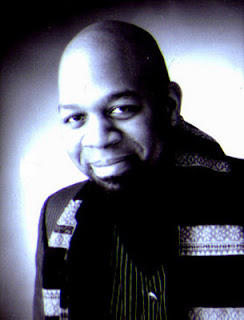 Dimes, who also seems to be known as the bizarre yet befuddled Dr. Sarcofiguy, host of Spooky Movie Television, which screens short films from the Spooky Movie International Horror Film Festival in Washington, D.C. In addition to SMT, Mr. Dimes is also an author, performer, humorist, and graphic designer with several works to his credit--something of a Renaissance man among his horror host brethen. I had the pleasure of interviewing Mr. Dimes to get the full story on his work and his real connection with the mysterious Dr. Sarcofiguy, so I invite you to join us as we begin our Halloween party for 2011, and listen in to my chat with Mr. Dimes. Or is it actually Dr. Sarcofiguy? Read on...

Darling, thank you so much for participating in THE MONSTERGRRLS' THIR13EN FOR HALLOWEEN. Please tell us about yourself and what you do.

My name is Elmer Fudd, millionaire. I own a mansion and a yacht!

(Laughs) Er--wait, wait. My name is John Dimes, and I'm a Writer/Graphic Designer/Songwriter/Entertainer. I used to perform stand up comedy, which meant I was funny in front of people. Now I'm funny behind people's back. Occasionally I'm funny smellin'. The level of my olfactory offenses depends, of course, on the season (I love the winter! You have to be pretty pungent to smell stuff in the Winter), and how much it rains. That hurricane Irene had me smelling like damp earth and fallen rose trellises for several weeks.

I've also been in several bands. My favorite: STUDS U.K. Mind you, I'm not British, and neither were my band mates. But we were undeterred.

I see. Well, I have spoken at length with my sources, and we understand you have connections to a mysterious, eccentric and possibly fictional gentleman named Dr. W. E. B. Sarcofiguy. Can you elaborate and otherwise account for his character? 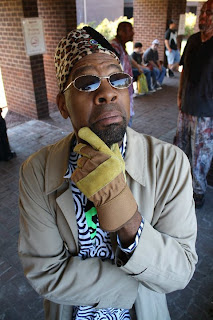 Dr. Sarcofiguy is just a gentle, fez-wearin' country doctor with a predilection for horror films. For the past 15 or so years, he's been host of both The Spooky Movie Show and Spooky Movie Television. He's guest appeared on such charming programs as Creature Feature with the legendary Count Gore De Vol on countgore.com, and he's been on Monster Madhouse Live with host Karlos Borloff. Dr. Sarcofiguy has also been featured in several documentaries: Virginia Creepers, American Scary, and the ever charmin' Every Other Day Is Halloween. Heck, he's even been featured in several magazines like Fangoria, Horror Hound, and Rue Morgue Magazine. He's an attention whore wrapped in a phenomal phenomenalisation of a phenom, I tell ya!

(After a long stare and raised eyebrow) Really.

Yes. He likes to counsel folks in the aftermath of a rotten romp in the hay. He loves getting calls. That is until one time when he was counseling someone over the phone about a particularly dismal episode. The young lady in question was going on and on about how bad it was, when the police broke through the line to explain that the phone call was coming from inside his own house!

Hmmm. Well, we understand that he has a female stalker with romantic designs--who is this mystery woman? 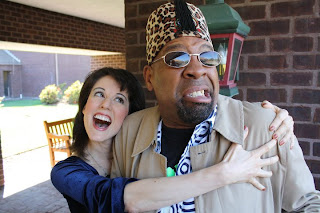 Ah, the mystery lady in question is the adorable Boo DePest as played by the equally adorable Leanna Chamish. Doctor Sarcofiguy, for some odd reason, spurns the advances of the lovely Boo DePest. Why, you can cut the sexual tension between the two with a sexual tension cutter, which I'm heard is available rather inexpensively through QVC! I think George Foreman is a sponsor! He's so industrious, that George Foreman.

The esteemed Dr. Sarcofiguy apparently co-wrote a book with you entitled There Are No Bad Movies (Only Bad Audiences). What is this book about?

It's just like it sounds: There aren't any bad movies, only rotten, or unsuitable audiences for them. Movies are like finding a potential love interest: There's something, or somebody, for everybody! 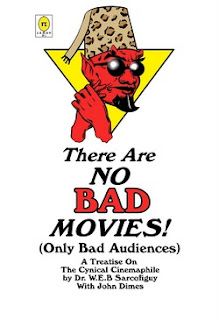 There Are No Bad Movies (Only Bad Audiences) was basically inspired by every spoiled rotten filmgoer I've ever known. They complain about the plots, and characters, about being too much action, or too little action, or being too long. My philosophy: The movie isn't too long, it's just that you got bored and ran out of patience to sit through it. It's your fault you're not enjoying the movie. The movie is what it is. A piece of entertainment. If you're in the mood to be entertained by it, then awesome.

The book was written to make people take responsibility for why they really can't stand a movie. Because there are snobs out there who won't stop until only the movies they like exist, leaving people who actually enjoy flicks like the recent Conan film, or the spate of remakes, or movies like Human Centipede, to cower their heads in shame at their cinematic choices! Critics should never make a person feel as though they should crucify themselves, or explain their tastes to anyone! For shame, I say. Dr. Sarcofiguy's statement to this: "Smacking you is the sound of one hand clapping!"

Well, quite. But you—or rather, both of you—can be called horror hosts, and "horror host" has many definitions. What is yours?

My definition of a horror host is simply a being who is like a Master of Ceremonies. He/she should be just as entertaining as the films they are showing. And if the film isn't entertaining, then you should psyche folks up to enjoy it nonetheless. A horror host should be a complimentary experience to the films shown.

You have other creative projects. Will you please share? 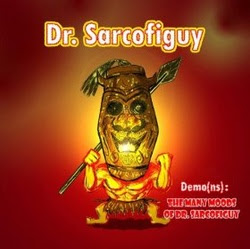 Well, Dr. Sarcofiguy has an album called DOCTOR SARCOFIGUY- The Many Moods of Dr. Sarcofiguy, which is available as an MP3 exclusively through Amazon.com! There are songs about werewolves, vampires, and serial killers. And songs of love! Yesss. There are two music videos available for perusing on Youtube. One for "My Girlfriend Is On Fire," and the other "Nosferatu" which features the charming Boo DePest.

I also have a comic entitled 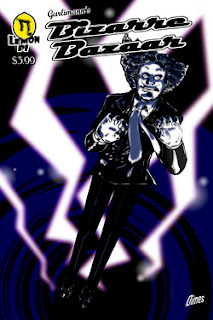 Gurlimann’s Bizarre Bazaar (available through Indy Planet, or wherever comics are sold!) which features a horror host, of sorts, named Evelyn Gurlimann. It's for the David Lynch/Edward Gorey/Emily the Strange crowd. There are promo videos for Gurlimann’s on Youtube. Hell, I have a Youtube channel featuring a lot of promotional art and such.

Interesting. What is your viewpoint on the current state of horror cinema?

I'm so loving the grindhouse resurgence in films. Hobo With a Shotgun was amazing. And I'm enjoying some of the reboots of films. I thought Fright Night was an excellent revisit. It was true to the original, while being a thing unto itself. And the acting was incredible. I also enjoy the films that still rely on your own story/sensibilities as your enter into the theater, like the first Paranormal Activity film. And I like those old-school-creepy but intelligent films like Insidious.

So I guess I'm saying that the current state of films is doing just fine. They seem to be trying to make them intelligent and scary without being overtly "torture gore," you know? Like the Saw films. I wasn't a very good audience for those films. But God bless those who love 'em, though! (See how it works?!)

Neither was I, although I found the first one a most interesting presentation, and I certainly would deny no one else their cinematic pleasures. But in light of the season, what is your favorite Halloween memory?

My favorite Halloween memory is me making devil head ornaments out of papier-mache for my first Halloween tree. That was about, um--five years ago! My childhood memories of Halloween were a blur of bad Ben Cooper masks cutting into my eyes, because the rubber bands bound the masks too tightly to my skull! Oh, and all the sweat streaming into my eyes because the plastic never let your pores breathe! And the fact that I was a little black kid wearing this incongruently white face! Too Hannibal Lecter for me! Hee!

Put up the Halloween tree, carve pumpkins, and contemplate looking at at least two out of the three movies I like looking at on Halloween: Halloween III: Season Of The Witch, I, Madman, or Torture Garden. Mind you, I tend to look at them all year long, but it's even more special on Halloween. Especially Halloween III!

A most proper seasonal celebration indeed. It’s been lovely, Mr. Dimes, and thank you very much for doing this with us!

No problem! Thanks for the invite, y'all! Stay Crepusculariously Creepy!

So there is my chat with Mr. Dimes, and if you will click on the various links throughout our interview, you will find more information on all his various projects and a few other delights as well. I think I shall curl up with a spooky movie myself before our next visit, so do return for more fabulous frights on The MonsterGrrls' Thir13en For Halloween. Be careful, darlings... it's getting dark earlier, don't you know...