ATTACK OF THE HORROR HOSTS: JEBEDIAH BUZZARD AND THE FRIGHT-TIME FUNHOUSE By Punkin Nightshade 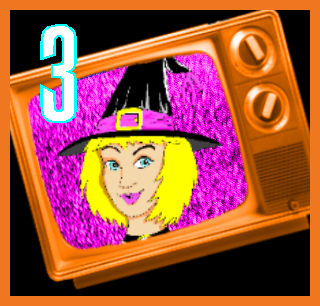 Howdy there! This here is Petronella Nightshade, and everbody calls me Punkin. Today I am speakin to you through this Internet blog for The MonsterGrrls' Thir13en For Halloween, and I am doin another one 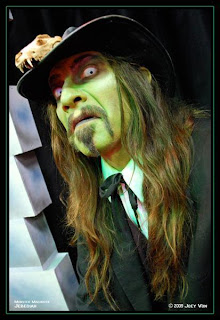 of the Attack Of The Horror Hosts. I am speakin here with Mr. Jebediah Buzzard, and it seems to me that I knew some Buzzards way back when, but he is from Arkansaw and they was down from somewhere around Louisiana so I reckon they ain't no kin. Mr. Buzzard is hostin horror movies on his show what is called Fright-Time Funhouse, but he used to be a pitchman in a carnival one time, and he is also a musical feller and has done recorded him a CD and made him a movie and all kind of things, so I reckon he is up to more didoes than just hostin horror films. So here is me talkin to Mr. Buzzard.
Howdy do, and welcome to The MonsterGrrls' Thir13en For Halloween! Please tell us about yourself and what you do!

I hear tell that besides doin your own show you was also on that Monster Madhouse. How did you get connected with them folk, and how did you start hostin Fright Time Funhouse?

After I moved to the Eastern panhandle of the WV/Northern VA/ Washington D.C. region, I found that my show had been playing in Falls Church, VA for two years thanks to Curtis Prather, the founder of the Horror Host Underground. I soon met Karlos Borloff and crew, and the rest is history. As far as starting the Funhouse, it's a contractual obligation with the Prince of Darkness. Now I'm back in Fayetteville, Arkansas, ready to submit a Halloween comeback special.

I hear you is also a musician with a recorded CD, and that you's connected with a short horror film called Golgotha, AR. Can you please tell us about that? 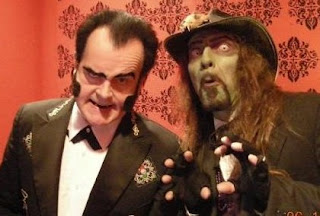 I did release a CD back in early fall; Jebediah Buzzard and the 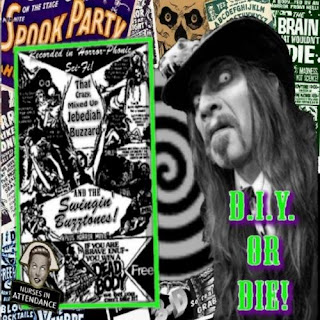 Buzztones’ D.I.Y. or Die!!! I credit Unknown Hinson for the inspiration. When I met and interviewed him in Vienna, VA he told me to "practice yer guitar and sangin' ever day, and avoid a prison sentence." The new producer of Fright Time Funhouse, Shane Steddum (a.k.a. Nahash ha'Rames) wrote, co-directed and starred in Golgotha, AR. Oh, and by the way, both Golgotha, AR and D.I.Y. or Die!!! are available through Amazon. 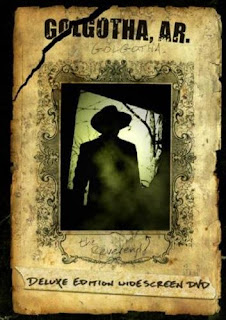 What is Golgotha, AR about?

Golgotha, AR is an unusual zombie film in that the zombies are seen more as tragic heroes. There are actually no violent scenes in the entire film, which proves that gratuitous gore is not necessary to disturb and creep one the ever-lovin'-Hell out!

Well, there is not much horror films what gives folks the creeps no more, so maybe we shall give that one a spin. But what's your favorite horror film?

It's the time of year when one can get the best deals on massive bags of Sweet Tarts, and get away with fantastic 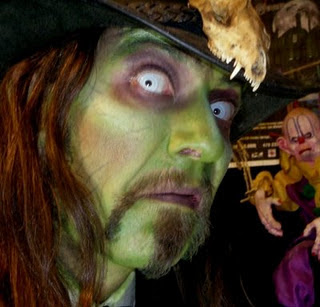 pranks. You can run at someone with a big fake knife and yell "I'm gonna rip your guts out through yer eye sockets!" and not get arrested. I also celebrate it in the Celtic pagan sense.

So that there is my interview with Mr. Buzzard, and you can click on them links all through the postin to find out more about all what he has done, and watch some of them horror movies he hosts. It sure sounds like our Mr. Buzzard shall be one busy feller this Halloween.

And speakin of busy, I am havin to leave you now cause it shall be Halloween tomorrow and I got ever kind of thing to do, but y'all come back for our next postin for The MonsterGrrls' Thir13en For Halloween. May blessings be on you and yours this Halloween season, and take care of yourselves and one another cause sometimes that is all we got in this old world. Happy Halloween, everbody!