TALES FROM THE MONSTER SHOP: THE AMAZING BRAINO, WEBMASTER OF ATOMIC MONSTERS.COM By Frankie Franken 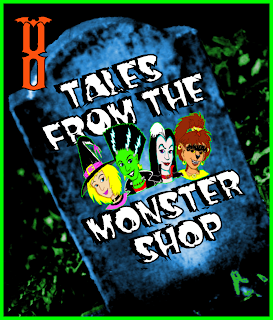 Hello, everybody! This is Frankie Franken reporting for The MonsterGrrls' Thir13en For Halloween, and welcome back! Today we're going to talk about AtomicMonsters.com, one of the funniest and coolest sites on the Internet. AtomicMonsters.com is a website dedicated to all those wild 1950's-era horror and sci-fi B-movies that featured things like radioactive giant monsters, invasions from space, hideous mutations, and other forms of mad science gone wrong. (Gee, I don't know about you, but to me it all sounds like a killer weekend!) The webmaster who runs AtomicMonsters.com is The Amazing Braino, and I had the pleasure of talking to him recently in his secret laboratory!
Wow, this is a really cool lab here at Atomic Monsters! We're pleased to have you for The MonsterGrrls' THIR13EN FOR HALLOWEEN, and would you please tell us about yourself and your website?

When I was a kid growing up in the 1970s, I used to watch monster movies on TV and went to see the latest Godzilla movies at the local theater. I grew up with two sarcastic brothers and was raised on a lot of Bugs Bunny cartoons, so I guess that's why I would later enjoy poking fun at cheesy monster flicks. 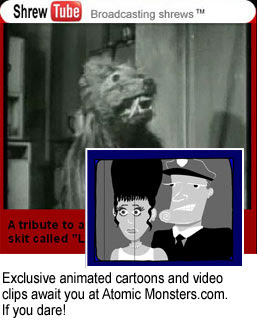 I actually started Atomic Monsters.com using free Web templates that Yahoo used to offer called Geocities. My wife, who works as a computer network administrator, got me started building web pages and I was hooked. I already possessed some killer Photoshop skills so I was off and running. Over the years, I learned to animate cartoons using Flash and made the Atomic Drive-In web page which features six original cartoons. Then came the Monster Juke Box where you can play eight classic Monster tunes like Monster Mash and Beware the Blob. You can desecrate your desktop with one of our frightening wallpapers or, if you're feeling particularly brainy, you can test your knowledge of monster movies on our quiz page called The B-Fuddler! And if you have any monstrous snapshots, e-mail them to me and we'll display them in the Photo Ghoullery! Or if you have any monster memories, e-mail them to The Dead Letter Office!
Cool! But why did you choose to review 1950's B-movie horror?
I enjoy them for their humor. But unlike movie parodies, 1950's B-movies weren't written to make people laugh. They are unintentionally hilarious simply because they were made so quickly. To understand, you need to know a little about... 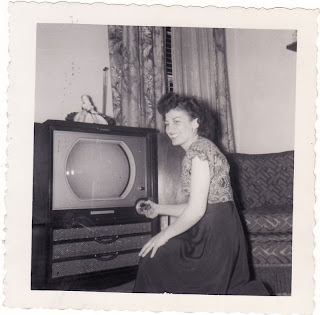 than going out to the movie theaters. But teenagers didn't want to watch variety shows on TV with dear ol' Mom and Dad. They wanted to go out and see outrageous films like The Crawling Eye and The Brain that Wouldn't Die. The only problem for Hollywood was: How to make enough movies to supply all the drive-ins that were popping up all over the country? 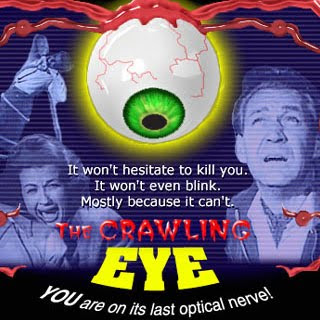 That's when independent filmmakers like Ed Wood and Roger Corman began producing quickie monster flicks. To save money on film, they would shoot scenes only once--no matter how bad they turned out. Instead of hiring a story editor, they would have the actors read their dialogue from a rough draft. Because of this, the continuity errors in the stories were never corrected. But working this way, an entire movie could be completed in a matter of days. The goal of the B-movie director was to churn out a film, get paid, then move on to the next one. So you can see why such a process led to disastrous, and often unintentionally hilarious, results.
How do you decide which movies to review?
It's a little tricky. I'm often asked to review classics like The Day the Earth Stood Still or War of the Worlds, but some of the old sci-fi movies are actually too good to poke fun at. I mean, you can tease them for their special effects that look antiquated now, however some won Academy Awards for special effects back in the day.
On the other hand, some movies are too dreadful to review because of their painfully slow pace, stilted dialogue and a monster that appears for 2 minutes at the end of the movie. For those films I'll sometimes do mini reviews on a page called It Conquered My Time.
So I look for a movie that has unintentional 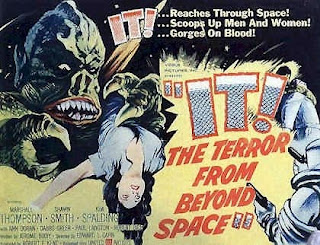 humor, a corny monster and some over-the-top acting. In other words, a movie that's actually enjoyable to watch. If I'm lucky, I'll find one with a reoccurring theme. For example, in IT! Terror Beyond Space, astronauts try to destroy a monster which is a stow-away on their rocket ship. The weapons they unleash on board escalate from guns to a bazooka! I had a lot of fun writing that review.
I'll bet you did! But what is your favorite horror film, of any decade? 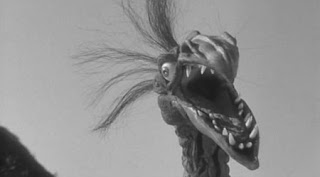 My favorite horror film is one I've already reviewed called The Giant Claw (1957) which features an anti-matter space buzzard that's as big as a battleship and protects itself with an invisible force field. The bird is a marionette and its wings slowly flap on wires. It also has bulging eyes and its beak has nostrils that flare.
Hmmm. Sounds like the recent Experiment that got loose in the Mad Scientists' Guild Hall a couple weeks ago. But back to the interview. In 2010, Atomic Monsters.com celebrates its 10th anniversary! How has your site changed over the years?
When I started the site, I had a dialup Internet connection and I remember waiting a long time for even simple graphics to appear a row of pixels at a time. A couple of years later, I started to 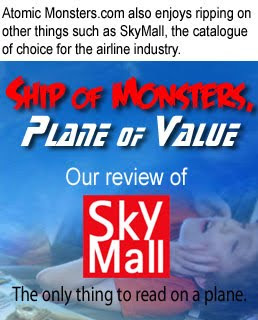 make animated cartoons and they always played slow and jumpy because dial-up wasn't fast enough. It was very frustrating. Of course now with high speed Internet, everything plays smoothly. We've even found a way to embed video clips into the web pages without having to link them to You Tube.
A few years ago, I started to really enjoy the writing part of it rather than the graphics. I'll use different comedy writing styles and I really enjoy writing little fictitious sidebars that relate to the movie. It's almost like writing comedy sketches. My personal favorite is a piece I wrote about SkyMall, the catalog you read on flights. It's on the review page of a movie called La Nave de los Monstruos (Ship of Monsters).
What's your favorite kind of monster?

I'm a big fan of Ray Harryhausen's stop-motion creatures from movies like Jason And The Argonauts and The Beast From 20,000 Fathoms, but my favorite monsters are the guys in the foam rubber costumes like The Creature From The Black Lagoon. It just looks like so much fun to wear one of those things.

We love those old Harryhausen movies too. But tell us a little bit about your sponsor, McFarland Publishing.
As you know, running an atomic laboratory isn't cheap! (Tesla coils don't grow on trees, y'know.) So I was delighted when McFarland accepted my plea to chip in to make sure the ol' particle accelerator keeps smashing atoms. McFarland publishes books in every genre you can think of, but it's their interviews with great sci-fi stars and directors of the past that keep my candelabra burning into the wee hours. You'll find a McFarland link at the top of every Atomic review web page.
Do you think that modern horror has lost its sense of humor about itself?
Nothing kills my brain cells faster than watching a modern horror movie. In fact, I haven't even rented the remake of The Wolfman. However, the Sci-Fi Channel has started to show movies on Saturday nights such as Mega Piranha and Sharktopus, which try to recapture some of that 50s zaniness without being a comic parody.
Let's talk about Halloween for a moment. What was your favorite Halloween costume as a child? 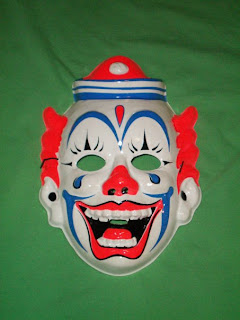 I usually had those costumes that came in the cardboard box with the cellophane on top. Remember walking outside in the dark with that plastic mask on your face? The mask had air holes but they were too small and your face would get sweaty from your own breath. And I couldn't see because the eye holes never lined up correctly. But my favorite costume was one I made myself when I was a teenager. I went as Doctor Doom, the villain from 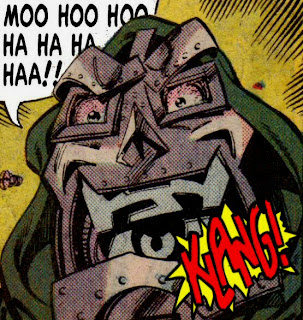 the Fantastic Four comics. To duplicate his silver body armor, I got aluminum plates from our local newspaper, scrubbed off all the printer's ink, and rolled them into tubes that fit around my arms and legs and made a metal face plate. Then I went to a secondhand clothes shop and bought material for the cape, a big leather belt and beat-up, leather boots. I used to go in every day and buy something a little weird and one day the owner said, “What are you buying all this stuff for, anyway?” I told her I was making a Halloween costume and the next day there was a sign in the window that read, "Come here for all your Halloween costume needs!"
What are your plans for this Halloween season?
Unfortunately, our Atomic Chamber is nestled on a road without any sidewalks so we don't get any trick-or-treaters, but we will spook-up the house inside and out and my wife and I will take our young daughter to all the kids parties in town, whether it's at a grocery store, book store, donut shop or our local zoo's Halloween festival – we try and hit them all. Besides that, it'll be a few weeks of watching classic monster movies and "curdle"-ing up with a good book like The MonsterGrrls Book 1: Out from the Shadows!
So there you have it, folks, straight from the Mad Scientist's particle accelerator! Be sure to visit AtomicMonsters.com and check out all the cool stuff the Amazing Braino has done and will continue to do. We'll see you next time on The MonsterGrrls' Thir13en For Halloween... and keep watching the skies!
Sincerely,
Francesca "Frankie" Franken 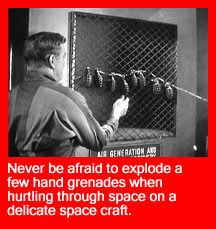