ATTACK OF THE HORROR HOSTS!! By John Rose 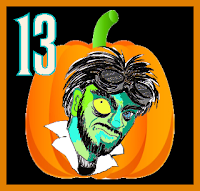 It's that time of fear again, folks!  The Grrls and I bid you welcome to the 2011 edition of The MonsterGrrls' Thir13en For Halloween, and our first post for the Ghost Wonderful Time Of The Year is about a purely American but little-heralded art form--that of the Horror Host.  Yes, we are talking about those television presenters dressed in cheap Halloween costumes, being filmed on even cheaper sets, usually working late into the night at local TV stations, bringing you classic and not-so-classic scary movies of days gone by.  Some people hate them, other people love them, and still other people view them as either a way to pass the time before commercial breaks or an interruption of the movie that allows for gathering of snacks and drinks.  But the horror host has a long and varied history, and is credited with the advent of what is known as Monster Culture among a certain cross-section of the American population.

The first appearance of this phenomenon is open to debate, but it all began with the release of what is known as the "Shock!" package, a collection of 52 classic Universal Studios horror films released to syndicated television in October of 1957.  In the 1950's, most local TV stations produced their own programming, having booth announcers and hosts (or hostesses) introduce shows, read commercials, and so on.  Promotional documentation included with the Shock Package both suggested and encouraged the use of a TV presenter for broadcast, and the Shock Package wound up being shown on late-night TV with a costumed "horror" host, who engaged in all sorts of odd and macabre antics and dark-themed comedy.  The concept was met with great success, and soon "horror hosts" presenting the Shock Package popped up in local markets all across America.

Though the identity of the "first" widely known horror host is open to debate, it is generally considered to be Vampira.  In 1953, struggling actress/model Maila Nurmi made a splash at choreographer Lester Horton's annual Bal Caribe Masquerade in Los Angeles, dressed in a Charles-Addams-inspired costume that caught the eye of local KABC-TV producer Hunt Stromberg, Jr.  After a frantic search by Stromberg to find Nurmi, she was hired to host horror and suspense movies as a character of her own creation; "Vampira," a graveyard sex goddess stitched together from bits of Theda Bara, Snow White and The Seven Dwarfs' Evil Queen character, and the comic strip Terry And The Pirates' Dragon Lady, with a bit of fetish-wear appeal thrown in.  Though Vampira was only seen in L.A., the ghostess soon gained national attention with articles and photos in Newsweek, Life, and TV Guide, leading to several appearances by Nurmi on nationwide TV shows such as Ed Sullivan's Toast Of The Town and The Red Skelton Show.

Shortly thereafter came Zacherley, the next horror host to gain widespread attention.  In 1957, a Philadelphia-based repertory actor named John Zacherle was hired as a horror host for the Shock Package at WCAU-TV in Philadelphia.  Appearing as a cadaverous, undertakeresque character who lived in a crypt with his wife "My Dear," a staked midget-sized corpse in a coffin, and "Gasport," an unseen dead thing in a canvas sack, Zacherle garnered popularity through a series of gory-goofy sight gags that have since become a TV standard, but at the time were considered revolutionary.  Zacherle moved up to New York affiliate WOR-TV, where his character's name "Roland" was dropped  and replaced with a re-spelling of his own name--Zacherley.  The rest, of course, is history: Zacherley would go on to host horror movies well into the 1960's, create several horror-themed records (the most famous of these being the 1958 novelty single "Dinner With Drac") and even edit two collections of horror stories.

Through the work of Vampira and Zacherley, Monster Culture, which more or less formed the first community of horror fans, was now live, and other hosts gained popularity, notoriety, and fond remembrances in their own markets and beyond.  The Shock Package would soon expand into the now well-known Creature Features package, which would not only include our old friends the Universal Monsters but also many classic science-fiction films, Roger Corman's B-movies starring Vincent Price, the Hammer horror films, and Japanese movie monsters, and the horror host phenomenon would include such notables as Cleveland's Ghoulardi and Sir Graves Ghastly; San Francisco's Bob Wilkins, who inspired and mentored Cinema Insomnia's Mr. Lobo; Washington, D.C.'s Count Gore De Vol, who inspired such hosts as Monster Madhouse's Karlos Borloff and Spooky Movie Television's Dr. Sarcofiguy; Virginia's The Bowman Body; and even Elvira, Mistress Of The Dark and Mystery Science Theater 3000.  The phenomenon extended to the Internet when Gore De Vol, removed from TV airwaves after his station's local programming was canceled in 1987, began to present weekly streaming video of movies and shorts hosted by the Count himself--and no doubt inspiring other horror fans who now share their passions in homemade videos posted on Youtube, Facebook, and other social media.

And if you're a fan or follower of a local horror host, you've probably heard all this before.  So why are these characters--not only Vampira and Zacherley, but the other numerous hosts who sprang up in their wake--considered important?  Because they perform a worthwhile service to fans of horror--or even those who may not be fans--by drawing them in and making them a part of the show, rather than just being passive voyeurs sitting in the dark in front of a flickering screen.  Even more importantly, they foster a sense of community among their fans and other lovers of horror and the macabre, which is becoming more and more necessary in the wake of an entertainment industry that is becoming increasingly disconnected and out of touch with the public at large.  Not every horror fan is enamored of endless sequels, Eighties slasher remakes, and excessive gore and special effects masquerading as "horror," which makes the Hollywood media machine see them as odd men out.  Fortunately, the horror hosts are still with us, standing in the cold light of an open castle archway or the midnight fog of an abandoned graveyard, offering laughs, scares, and plain old entertainment to horror fans, sitting down with us to watch that certain old cheesy movie that awakens a strange affinity in us that we cannot explain, and wearing strange/cheap/creepy/colorful/campy/spooky/interesting/sexy/fill-in-the-adjective-of-your-choice-here costumes while doing it.  And sometimes they even bring friends.

So in addition to our usual news, reviews and Halloween goofiness, this year we open the Thir13en For Halloween with a salute to the Horror Hosts, and we hope you'll join us as we talk to several of these folks and see what makes them tick and why they do what they do.  And we hope you'll stick around.  You might even make some new fiends.

Happy Halloween out there, whatever you are!!


MAD DOCTOR'S NOTE:  E-Gor's Chamber of Horror Hosts, which has an exhaustive listing of horror hosts old and new, can be found here.  Also, the Horror Host Graveyard can be accessed by clicking our title link.  --J.R.
Posted by John Rose at 11:35 PM No comments: