ATTACK OF THE HORROR HOSTS: COUNT GORE DE VOL By The MonsterGrrls 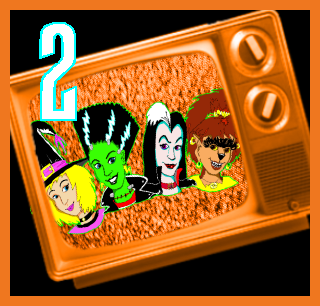 Currently based in Virginia, Count Gore De Vol has 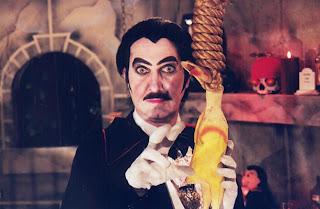 hosted horror films since 1971, and is known not only as one of the best horror hosts but also one of the greatest. He has been the subject of a documentary called Every Other Day Is Halloween, and today he is known for being the world's first horror host to take his show to the Internet! Creature Feature The Weekly Web Program not only shows movies but also does reviews and interviews with other leading horror hosts of the scene. Naturally, it couldn't be just one of us to interview him, so on this Halloween, before we hit The Dark Beneath (our local teen monster club in Morlock Heights) for its annual Halloween party, we all sat down to have a chat with the Count!
Frankie: Welcome to The MonsterGrrls' Thir13en For Halloween, Mr. De Vol! Please tell us about yourself and what you do!
I host horror, science fiction and fantasy movies on the Internet, in traditional style. That means it's one vampire against a world full of bad public domain films and I try my best to make them tolerable!
Bethany: How did your illustrious career begin?
I hosted my first movie on WDXR-TV in Paducah, Kentucky in 1971. However, I really got into the role of vampire around Halloween 1970 when I was asked to help out at a Halloween walk for the Paducah Parks and Rec Department. Then late one night in 1971 after one too many beers I blurted out to the station GM that we should have a vampire hosting horror movies. He turned to me and said,"You're hired!" However, I had to start all over again when I moved to WDCA in Washington, DC and finally got a long term show with Creature Feature that was on the air from 1973 to 1980, and then again from 1984 to 1987.
Punkin: Sir, you is known as the first horror host to start usin this here Internet. What caused this, and how has this big old technologcial gadget changed your work? 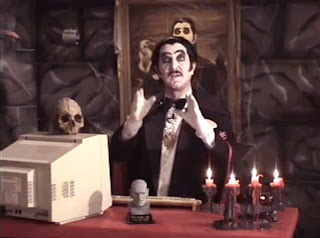 Well, in 1998, I realized that with the Internet, people would find my DJ company site and tell me how much they missed Count Gore! I realized that we could put hosted movies on the net then because everyone was using dial-up, but I also realized that someone had to be the first and it might as well be me! So, I took the show format, minus the movie, and added celebrity interviews, product reviews and more to create Creature Feature the Weekly Web Program on July 11, 1998.

Harriet: First of all, Mr. D, you are totally rockin' that 'stache! Second, what are some of your favorite horror movies? Do you enjoy modern horror movies or are you more of a classicist?
I enjoy movies with good plots, stories, acting and most of all...suspense!! I don't care when they were made. Just showing me a film with gruesome special effects does nothing for me.

Frankie: You've inspired many others to take up horror hosting. How do you feel about this?
I’m very flattered and honored that others have been 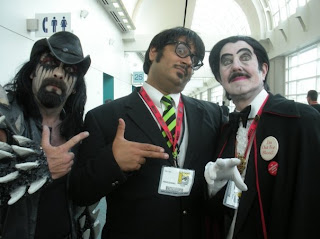 inspired by my work. And, I also encourage and help them when asked. For a while horror hosting seemed to be a dying art form, but not anymore. Next, the world!!!
Bethany: What is your favorite memory of Halloween, and what does it mean to you?
My favorite Halloween was the 1985 "Monster Bash!" This was a hosted horror movie and party that was broadcast live from a local cinema and draft house. We had hundreds of people in costume, a live band, games, prizes, lots of alcohol and we even showed Damien: Omen 2 for the folks at home. It was meaningful because it was the biggest most expensive show I had produced to that time, and I also got to party with my fans!
Frankie: Cool! What are you doing for this Halloween season? 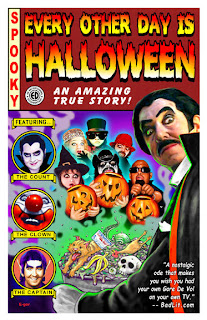 Unlike many hosts, I try and take Halloween off and let the mere mortals play. After all, for me, every other day is Halloween, which also happens to be the title of a great feature-length documentary about my career. To that extent, I bring out the fog machine, effects lights and music from Midnight Syndicate and prepare my domain for the brave souls who dare come up to ask me for candy.
And that is our interview with Count Gore De Vol! Gosh, we have had so much fun this Halloween hanging out with all these different horror hosts, and if you have a horror host who shows movies in your area, then do your best to support them in their endeavors! Plus, be sure to click our title link so you can check out the Count's website and see all the cool things he's doing--which we hope he'll be doing for a long time to come!
The Mad Doctor will be in soon with our last post for the season, so come back for the finale of The MonsterGrrls' Thir13en For Halloween for 2011! And from all of us to all of you, have a Merry, Scary, Happy Halloween! 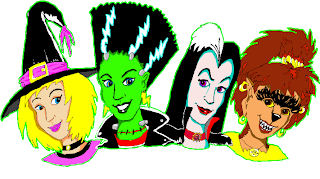 Posted by Frankie Franken at 6:00 PM

Email ThisBlogThis!Share to TwitterShare to FacebookShare to Pinterest
Labels: attack of the horror hosts