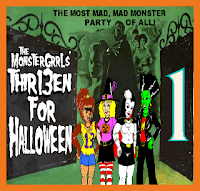 So it's Halloween, and may I wish everyone who joins us this evening a most happy, happy Halloween.  Usually at this point in the Thir13en For Halloween, I talk about a really cool horror film that some of the horror fans out there may have ignored, overlooked or simply are not aware of.  Well, this Halloween I'm bringing along a whole studio.  The legendary Hammer Film Productions has returned to the public eye with plans to make horror films for a new generation of Hammerheads, and with the release of the successful Wake Wood, their loving remake of Tomas Alfredson's Let The Right One In (titled Let Me In) and the upcoming The Woman In Black, it looks like they're in it to win it, folks.

Hammer Films has actually been around since 1934, when it was begun by William Hinds, a comedian and entrepeneur who named the company from his own stage name, Will Hammer.  The first Hammer release was the successful comedy The Public Life Of Henry The Ninth, playfully titled after Britain's Academy-Award-nominated The Private Life Of Henry VIII.  Hammer put out a further four films (among them The Mystery Of The Marie Celeste, starring Bela Lugosi) before being forced into bankruptcy in 1937.  In 1946, Hammer was revived by James Carreras, and the company went into shooting various adaptations of radio serials and original mysteries.

1955 saw Hammer's first real entry into the horror realm with an unexpected success: an adaptation of a sci-fi serial shown on BBC Television, The Quatermass Xperiment.  The popularity of this film led to a sequel, Quatermass 2, and Hammer began to investigate American distribution for its product.  Hooking up with Associated Artists Productions (AAP), AAP's head, Eliot Hyman, sent a script for an adaptation of Frankenstein to his contact at Hammer.  Due to concerns that the script followed Universal's film Son Of Frankenstein a tad too closely, the script was eventually rewritten by Jimmy Sangster as The Curse Of Frankenstein.  Directed by Terence Fisher, Curse Of Frankenstein brought together the soon-to-be-infamous team of Peter Cushing and Christopher Lee, who would appear separately and together in many more of Hammer's most famous horror productions.

The raging international success of COF brought forth a sequel, The Revenge Of Frankenstein, in which Cushing reprised his performance of Dr. Frankenstein.  Around this time, Hammer began to consider other horror icons, and in 1958, Horror Of Dracula exploded into theatres with Cushing and Lee doing another tag-team effort as Van Helsing and Dracula.  The technicolor radicality of the production and Christopher Lee's hissing, spitting, animalized performance as the Count broke international box-office records and secured Hammer the rights to remake the entire Universal library.

The success of The Curse Of Frankenstein and Horror Of Dracula led to entire cycles of films based on these iconic monsters, with Cushing and Lee cavorting as Van Helsing and Dracula for most of the Dracula cycle and Cushing gnawing the scenery as the ever-deranged and viciously sarcastic Dr. Frankenstein through several Frankenstein sequels.  Both of these cycles, and Hammer's other pictures, also gave rise (in more ways than one) to the entity known as Hammer Glamour, as a bevy of beautiful actresses were certain to appear in each new picture.  Among the notable Hammer Glamourites were Ingrid Pitt (who appeared as Countess Karnstein in The Vampire Lovers), Barbara Shelley (who appeared in Dracula, Prince Of Darkness and The Gorgon, and would soon become Hammer's top female star), Martine Beswick (who had the title role in Dr. Jekyll and Sister Hyde), and the legendary Caroline Munro (famed for Hammer's somewhat offbeat Captain Kronos, Vampire Hunter).  Apart from the Frankenstein and Dracula cycles, Hammer did four notable films based on the Mummy (The Mummy, Curse Of The Mummy's Tomb, The Mummy's Shroud, and Blood From The Mummy's Tomb) and would also create other famous (and notorious) films such as Plague Of The Zombies (which would precede Night Of The Living Dead by about two years), Curse of The Werewolf (with the much-loved Oliver Reed as the Werewolf), and adaptations of both The Phantom Of The Opera (with Herbert Lom) and H. Rider Haggard's novel She (featuring Ursula Andress as, well, She).  Hammer wound down in the 1970's with a disastrous production of Alfred Hitchcock's The Lady Vanishes, which all but bankrupted the studio.  However, the Hammer films would not be forgotten, as scads of horror hosts in local markets and such shows as Creature Features and Chiller Theatre would include most of Hammer's output in their offerings, ensuring their place--and much love--in the minds and hearts of horror fans.

In 2007, Hammer resurfaced in the news, as Dutch producer John De Mol purchased the Hammer films rights and planned to restart the studio.  Their first production was a Myspace-exclusive contemporary vampire story called Beyond The Rave.  In 2008, work began on Wake Wood, shooting in Donegal, Ireland with backing by the Irish Film Board, and led to Wake Wood seeing a limited UK/Ireland release in March of 2011.  Bolstered by good reviews and success, Hammer soon partnered with Overture Films and Relativity Media to introduce a 2010 remake of the acclaimed Swedish vampire film Let The Right One In, titled Let Me In.

In 2012, Hammer will return to the Gothic sensibilities with which it made its mark, via a new supernatural thriller titled The Woman In Black.  Based on the Susan Hill novel of the same name, the film stars Daniel Radcliffe (of Harry Potter fame) and is the story of a Victorian-era London lawyer who journeys to a remote English village for the settlement of the recently deceased Alice Drablow, and finds a terrible supernatural mystery that endangers his own child.  Set to hit theaters in February of 2012, The Woman In Black has all the Gothic horrors and mystery that made Hammer great, and in the current mire of remakes, sequels and half-baked genre films, it's no doubt going to be one of the better horror releases of 2012.  Watch for it.  We'll be there.


In closing, the MonsterGrrls and I, as always, have taken great delight in bringing you fun, laughs, and frights for Halloween, and we hope you stick around for what we do next.  May all of you reading this have a prosperous, safe, and happy Halloween for 2011, and please join us again for the party in 2012.  This time, maybe we'll see if we can't blow up the lab...

Happy Halloween to all,
John Rose (the Mad Doctor) and the MonsterGrrls: Frankie, Bethany, Harriet and Punkin

SPECIAL THANKS TO: John Dimes, Rebecca Bishop, Mod Ghoul, Diane Irby, Sinister Minister and the Altargirls, Uncle Fright, Marlena Midnite, Nicolette Lewis and Sasha Trasha, Bobby Gammonster, Joe Flynn, The Bone Jangler, The Pumpkin Man, The Movie Gravedigger, Jebediah Buzzard and the great Count Gore De Vol.  We couldn't have done any of this without you, and keep up all your good work.  Happy Halloween to you all from all of us here at the Monster Shop!! --J.R. and the Grrls
Posted by John Rose at 9:34 PM

Email ThisBlogThis!Share to TwitterShare to FacebookShare to Pinterest
Labels: tales from the monster shop