H. P. LOVECRAFT AND THE DOOM THAT CAME TO HOLLYWOOD By Frankie Franken

Hello, everybody! Welcome back to The MonsterGrrls’ Thir13en For Halloween, and we’re almost to the big day! Since we’re doing Tales of Unease and looking at how horror literature connects to film and television, we’re going to look at one of the biggest names in horror literature: Howard Phillips Lovecraft. Along with Edgar Allan Poe, Lovecraft is considered a major influence in modern horror fiction.

Born in 1890 in Providence, Rhode Island, Lovecraft was the only child of Winfield and Sarah (nee Phillips) Lovecraft. Susan’s father, Whipple Van Buren Phillips, was a successful businessman who, in his old age, helped raise the young H. P. and encouraged him to have an appreciation of classical literature. Whipple educated H. P. not only in the classics but also spun original weird tales for his grandson’s entertainment, which may have had a direct influence on Lovecraft’s later writings. In April of 1893 his father was committed to Butler Hospital in Providence, which left his mother grief-stricken, and in 1896, his grandmother died, which, by his own account, sent his family into “a gloom from which it never fully recovered.” Both of these events marked him considerably.

Through most of his educational career, Lovecraft was prone to health problems that caused him to miss most of any kind of regular school attendance, even though he enjoyed reading and learning and had a keen interest in astronomy and science. He also began to write letters to editors of pulp fiction magazines, which eventually resulted to his being invited into the United Amateur Press Association. Inspired by writers such as Edgar Allan Poe, Arthur Machen and Algernon Blackwood, he began to write short stories and fiction that fell under the category of “weird fiction.” 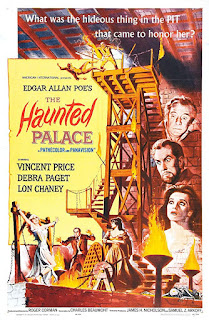 Lovecraft is best known for creating the Cthulhu Mythos, which featured a pantheon of godlike beings called “the Great Old Ones” who continuously took control of hapless humans or were worshipped by cults that attempted to bring them into the human world, usually with a book of evil magic known as the Necronomicon. Though it seems like this would be easy to translate into movies, Hollywood has had a difficult time creating films from the works of H. P. Lovecraft. But we’ll look at a few of the most notable here.

The Haunted Palace (which Bethany has spoken about here) is the first attempt at a Lovecraft film, and probably the most easily accessible. Made in 1963 by Roger Corman and based on Lovecraft’s novel The Case Of Charles Dexter Ward, it details the story of the eponymous Ward (Vincent Price) who is possessed by the spirit of his ancestor, a warlock named Joseph Curwen, in order to exact revenge on the village that condemned him to death some 110 years earlier. Many of Lovecraft’s most notable elements appear in this film: deformed townspeople, references to Elder Gods, the Necronomicon, and even a monster in a pit! It’s a great first attempt, even if it does take its title from an Edgar Allan Poe poem. 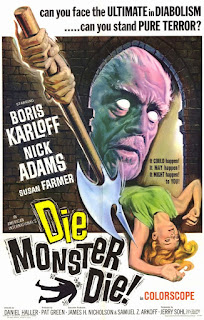 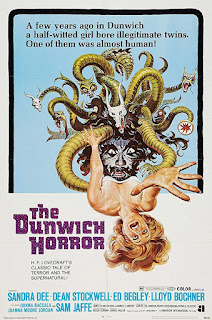 The Sixties was a period in which Gothic horror and the monster movie were experiencing a renaissance, and the success of The Haunted Palace brought in other attempts at Lovecraft films. Die, Monster, Die! (1965) starred Boris Karloff, and attempted to bring Lovecraft’s tale “The Colour Out Of Space” to the big screen, telling the story of an American scientist (Nick Adams) who visits his girlfriend’s family in Britain and finds that her father, Nahum Witley (Karloff) is attempting to use a meteorite that crashed on his property to mutate plant and animal life, as well as members of his own family! In The Shuttered Room (1967) Mike and Susannah Kelton (Gig Young and Carol Lynley) travel to the village of Dunwich to take possession of an abandoned—and cursed—mill that was left to her by her parents. The townsfolk of Dunwich, including Susannah’s cousin Ethan (Oliver Reed) are distant, hostile, and in Ethan’s case, threatening—and most of it has to do with what’s living in the room at the top of the mill! In 1970, Hollywood would return to Dunwich with The Dunwich Horror, which featured Dean Stockwell as Wilbur Whately, a wanna-be warlock who lures his student Nancy (Sandra Dee) to Dunwich with the intent of sacrificing her to the Old Ones. Directed by Daniel Haller, who also directed Die, Monster Die!, poor reviews of the actors’ performances led Hollywood to shelve Lovecraft-based films for awhile. (More like a decade and a half!) 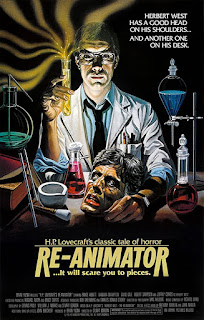 In 1985, H. P. Lovecraft would return to the screen with Re-Animator, directed by Stuart Gordon and based on a 1922 serial novelette by Lovecraft called Herbert West, Reanimator. Starring Jeffrey Combs in what is now considered a signature role as mad scientist West, who attempts repeatedly--and horrifically--to resurrect the dead with a chemical serum of his own devising, Re-Animator would open a gateway for Gordon, Brian Yuzna and Charles Band, who ran Empire International Pictures and later Full Moon Pictures, to bring more works of Lovecraft to the screen. Full Moon followed through with From Beyond, Castle Freak, and The Unnamable, and Stuart Gordon would eventually direct Dagon in 2001, based on the novella “The Shadow Over Innsmouth.” Re-Animator would eventually get a sequel, Bride Of Re-Animator, that was also well-received by fans.  And in 1987, the Lovecraft legacy would further infect Hollywood with David Keith's The Curse, a re-telling of the story "The Colour Out Of Space" about an entire farm infected by the liquid that seeps from a meteorite that crashes nearby. 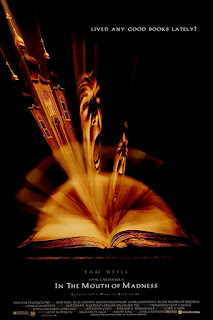 Probably one film that is truest to the spirit of Lovecraft while not actually based on a Lovecraft story is John Carpenter’s 1994 film In The Mouth Of Madness. In this film, Sam Neill plays an insurance investigator who is searching for missing horror novelist Sutter Cane, and instead finds that Cane’s stories have released a race of monstrous creatures who are trying to reclaim the Earth! With frequent red herrings all along the storyline, this film makes continuous references to Lovecraft’s works and settings.

So what’s in store for the future? Well, that’s unknown. However, even after all this time, people are still reading Lovecraft and enjoying his works, and Hollywood has noticed, as you can see by this post! So I think that for the foreseeable future, we’ll be seeing more films inspired by this venerable author.

Golly, it’s almost time! Come back for our grand finale for The MonsterGrrls’ Thir13en For Halloween, and I hope you all have a great one!

Posted by Frankie Franken at 4:47 PM