THE WORST WITCH By Punkin Nightshade

Hey, ya’ll, and welcome back to our blogpostin for The MonsterGrrls’ Thir13en For Halloween. This here is Petronella Nightshade, what am Punkin, and today I am speakin to you about somethin called The Worst Witch. For Halloween this year we have been doin somethin that Mad Doc calls Tales Of Unease, which shows how certain movies, TV shows and other things in horror and spooky stuff is comin from books and such, and The Worst Witch is one of those. This here is a book series by a lady name of Jill Murphy, what has been made into movies and television shows a bunch of times. Some folks think them Harry Potter books might have been inspired by The Worst Witch, and they may be right, cause the first one of these books came out in about 1974 and was best-sellin then, so it would of made sense if Miz J. K. Rowling (what wrote Harry Potter) had read it somewheres. People is always gettin ideas from somethin what came before them.

The Worst Witch is a story about a youngun name of Mildred Hubble, what is attendin a boardin school for magic called Miz Cackle’s Academy For Young Witches. She’s a good little girl with a good heart, but she has gotten to what’s called the awkward age, and she’s a bit clumsy, so she ends up messin up things a lot by accident, and cause of that, everbody at Miz Cackle’s think she’s the worst student there. Miz Cackle herself, what the school’s named after, is a nice woman and thinks Mildred’s goin to be all right as she goes along, but her teacher Miz Hardbroom is kind of a hard case and think she just don’t try hard enough. Even though everbody think Mildred is the worst witch, she still got her some friends at school, Maud Spellbody and Enid Nightshade (I have a cousin named Enid somewheres, but this ain’t her, so it must be a different set of Nightshades) who often end up gettin in trouble right along with her, which is all right cause younguns generally get up to didoes sometimes. There’s also another girl name of Ethel Hallow, who’s kind of a snob and don’t like nobody but herself.

Now speakin as a witch, I did kinda go to a school for awhile that was like Mildred Hubble’s, but I didn’t last too long there, and it warn’t cause everbody thought I was the worst witch or nothin, but what happened was they graduated me kind of early.* So I didn’t get a whole lot of the experiences she had, what with boardin up in a school and goin to class ever day like at a college or somethin. But Miz Murphy was born over in England, and they do them boardin schools there, so that is all right. 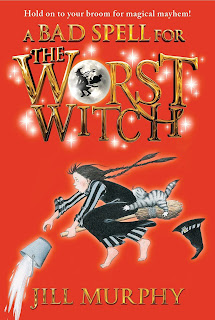 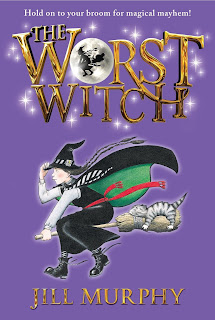 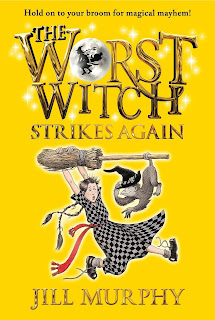 In the first of them books, The Worst Witch, Mildred starts goin to the school as a first-year student. Ever first year is given a black cat, what they teach to ride on their broomstick with em, but Mildred ends up with a gray tabby cat cause there ain’t no black cats left. (I have a golden tabby named Pookie, ad he don’t ride with me, so I don’t know that this is how real witches do. The color of the cat don’t really mean nothin no way.) Anyway, as they go along with Mildred gettin in trouble here and there, she finds a bunch of other witches in the woods what are plottin against Miz Cackle and the Academy, so natural she has to save the school from em. This here shows that even though she ain’t perfect, she ain’t bad, and has got some pluck to her.

The second book, The Worst Witch Strikes Again, come out in 1980. In this one Mildred gets assigned to take care of a new first-year name of Enid Nightshade, who turns out to be a big practical joker, and Mildred gets into more trouble mostly cause of Enid. In the third book, A Bad Spell For The Worst Witch (1982), Mildred comes back to Miz Cackle’s as a new second-year student, gets into it with Ethel Hallow, and ends up gettin turned into a frog by Ethel Hallow. And this was how I knowed this was a fantasy story, cause most of the time we witches is too busy to be goin round turnin folk into frogs, and besides that particular spell is a lot harder than you think. Anyway, Mildred finds another frog out in the school’s lilypond who is actual a magician name of Algernon Rowan-Webb, what got turned into a frog by some other magician feller long ago, and so Mildred makes up her mind to save him. 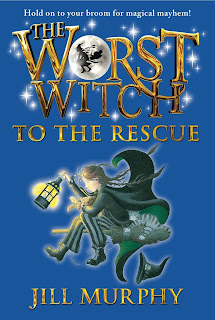 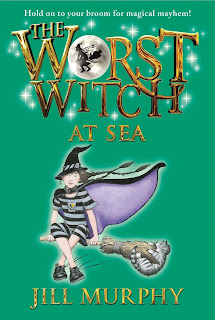 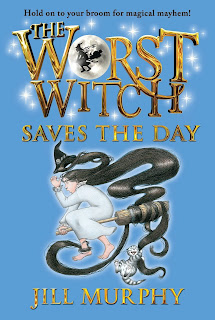 In the fourth book, The Worst Witch All At Sea (1993) Mildred gets invited along with all the other second-year students out to Mr. Rowan-Webb’s home, Gloom Castle, for a holiday, but Miz Cackle tells her that she ought to replace her cat Tabby, since he ain’t a black cat like all the rest. It must be some kind of English thing that ever witch got to have a black cat, but Mildred natural don’t want to give up Tabby even if he won’t ride on the broomstick. Mildred sneaks Tabby along with her to Gloom Castle, and of course gets up to adventuresome didoes, which is natural part of these books. The fifth one, The Worst Witch Saves The Day (2005), has them bad witches from the first book comin back, and it is that the one leadin em is Miz Cackle’s sister Agatha, who looks just like her and is a twin. Agatha is jealous of Miz Cackle bein head of the Academy, and so she wants to mess everthing up by turnin everbody into a snail, and natural Mildred has to stop her. The sixth book, The Worst Witch To The Rescue (2007) has old Ethel Hallow discoverin that Mildred has come up with a spell to make animals talk for a class project, so she steals it and tries to take it as her own. The whole plot in this book is real complicated, but it comes down to Mildred havin to find a tortoise named Einstein that she made able to speak so she can prove the project was hers. There’s three other books in this series what got plots that are just as wild, and makes this a good series for folks to read.


Now it is natural that someone would be wantin to turn this here story into a movie or some such, and so that’s just what they did. In 1986, the folks at ITV in Britain made a television movie of The Worst Witch, what was mostly based on the first book and followed it pretty close. Fairuza Balk, what had played Dorothy in the movie Return To Oz, played Mildred Hubble, and later, when she had growed up a little, she would play another witch named Nancy in a movie called The Craft. Two famous actin ladies called Diana Rigg and Charlotte Rae played Miss Hardbroom and Miss Cackle, and a real famous actin feller named Tim Curry, what had been in that Rocky Horror Picture Show, appeared as The Grand Wizard and even sung a song in that movie. A couple of years later, in 1998, them ITV folks was back at it again doin a whole TV show of The Worst Witch, what run for three series and had Georgina Sherrington and Felicity Jones playin Mildred Hubble and Ethel Hallow. This show spun off into another series in 2001 what was called Weirdsister College, and had them same two actresses playin Mildred and Ethel goin off to college to further their magical education, and it was kind of for older kids what is in high school. Another series, The New Worst Witch, had Mildred’s cousin Henrietta Hubble goin to Miz Cackle’s, and it run for two series from 2005 to 2007.

Them books are still popular enough that in 2017, a brand-new series of The Worst Witch came out, what has been produced internationally between CBBC (a brand of TV for younguns in Britain), ZDF (a German public-service broadcastin network), and Netflix. This here has been streamin on Netflix for some time now, and to my mind it’s the best of the bunch, and follows the books real close. Bella Ramsey, what has been actin on that Game Of Thrones, plays Mildred Hubble, and Clare Higgins (Mad Doc knows her from that movie Hellraiser) plays Miz Cackle in this one. It’s right good and is real well-done, so if you have been readin the books, or you ain’t read the books but want to get a notion of what it’s all about, why just fire up your streamin gadget and jump in, since everbody has got the Netflix nowadays.

So I am done tellin this tale, and blessings be on all of you for this Halloween season. We ain’t got too long left, so be sure to come back soon for our next postin for The MonsterGrrls’ Thir13en For Halloween, cause it is one thing and then another. Blessings be on you!

MAD DOCTOR’S NOTE: The Worst Witch Netflix series is still available for streaming, and the books are all available for purchase at Amazon or other fine booksellers, and probably for lending at your local library.

*Punkin holds an “honorary degree of graduation” from a prestigious witches’ school called Grungemound Academy For Young Witches, which she attended long before she began at Clearwater High School in the human world. This degree was given to her after a memorable three days at Grungemound for two reasons: one, the staff and most of the students were mortally terrified of her power as an Adept, and two, there was really nothing else they could do with a student who, because of her inborn Power, instinctively knew everything. Many of those staff who were there during those three days remember her fondly, but not without evidence of a nervous condition.

Posted by Punkin Nightshade at 2:45 PM